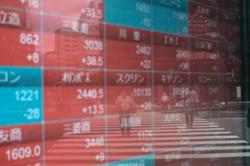 HONG KONG (AFP): Asian markets were mixed Tuesday (July 27) with confidence at a premium after the previous day's sell-off, with investors keeping a wary eye on China following its latest crackdown on a range of sectors.

The announcement of new regulations on the tutorial industry -- which has decimated private education firms -- along with more moves against tech firms and fresh rules for property and food delivery companies has traders worrying where Beijing will strike next, analysts said.

That comes against a backdrop of rising concerns about the fast-spreading Delta Covid variant and the slow rollout of vaccines, with some governments having to impose new lockdowns or other containment measures.

Meanwhile, the highest level China-US talks under the Biden administration ended without much headway in resolving their differences, suggesting tensions between the two superpowers will continue to simmer.

In early trade, Hong Kong extended Monday's drop of more than four per cent after investors were spooked by Beijing's latest move to tighten its grip on the economy.

At the weekend it said it would prevent firms that teach school curriculums from making a profit, raising capital or going public, making them virtually uninvestable.

"Indeed it looks to be broadening, with no clarity as to when and where it will end."

Hong Kong-listed tutorial firms sank again Tuesday though the losses were nowhere near as steep as Monday.

There were also losses in Shanghai, Wellington and Taipei, but Tokyo, Sydney, Seoul, Manila and Jakarta all rose.

The downbeat mood in Asia was in stark contrast to Wall Street, where all three main indexes finished at record highs yet again, thanks to more healthy corporate earnings and a long-running belief that the long-term outlook for the economy remains strong.

The US advances have come despite a worrying surge in cases of the Delta variant.

Eyes are now on the Federal Reserve's key board meeting, which will be closely followed for some forward guidance on policy in light of the economic recovery and concerns about surging prices.

While the bank is expected to maintain its accommodative stance for the time being, it is thought officials will begin discussing tapering its bond-buying programme.

"Equity markets have oscillated between inflation and growth fears, which should not coexist," Esty Dwek, at Natixis Investment Managers Solutions, said.

She added that "growth will hold up, the reopening will last and the Fed will err on the side of caution and maintain its accommodative stance", while warning of volatility continuing in the months ahead.

The release of earnings from market titans including Apple, Microsoft and Amazon are also due this week, and observers said there was a likelihood that firms could continue to enjoy growth for another 18 months as the reopening presses ahead.