BEIJING (China Daily/ANN): "Quanzhou: Emporium of the World in Song-Yuan China" was inscribed onto the Unesco World Heritage List on Sunday (July 25) during the ongoing 44th Session of the World Heritage Committee, which is hosted in Fuzhou, Fujian province.

The new entry includes 22 sites and monuments across Quanzhou, which jointly reflect a prosperous picture of maritime trade from the 10th to 14th centuries.

The Song (960-1279) and Yuan (1271-1368) dynasties witnessed a peak in ancient Chinese maritime trade, and Quanzhou, then known overseas as Zayton, grew into one of the busiest seaports in the world.

The 22 representative historic monuments and sites include administrative buildings and structures; facilities showing the city's structure, such as its gates, walls and roads; religious sites and statues that witnessed multicultural communities; cultural memorial sites and monuments; iron and ceramic production sites; and the city's transportation network formed by bridges, docks and pagodas that guided voyages.

Together, these comprehensively reflect the Song-Yuan Quanzhou's highly integrated maritime trade structure, and the diversity of the social system formed by the supporting institutions, communities and cultural elements, according to the Quanzhou Cultural Heritage Nomination Office.

Tian Xuejun, chairman of the 44th Session and director of China's National Commission for Unesco, said Quanzhou's inscription on the list reflected the international community's recognition of its status as a channel of Sino-foreign cultural and economic exchanges and a key node in the ancient Maritime Silk Road trade route.

The Song-Yuan heritages in Quanzhou provide an example in today's world for exchanges and mutual learning among civilizations and a community with a shared future for mankind, he said.

Key sites in Quanzhou include Kaiyuan Temple － the biggest ancient Buddhist temple in Fujian province － Luoyang Bridge, Qingjing Mosque － one of the oldest mosques in China－ and the archaeological site of the Maritime Trade Office, established in 1087 as a national-level key institution guiding trade.

"Since the accession to the World Heritage Convention (in 1985), China has always worked closely with other state parties and relevant international organizations to preserve and inherit the collective treasure of humanity," Li Qun, director of the National Cultural Heritage Administration, said in a livestreamed speech at the 44th Session.

"In the future, China will continuously keep its commitments and take more responsibilities for World Cultural Heritage by enhancing conservation, management and international cooperation," Li said.

Wang Yongli, Party chief of Quanzhou, said the city will further strengthen protection and management of its cultural heritage sites to well maintain their outstanding universal value, for which they were recognized by the World Heritage Committee.

"Quanzhou: Emporium of the World in Song-Yuan China" is the 56th Chinese entry on the World Heritage List. - China Daily/Asia News Network 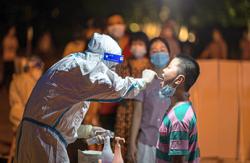