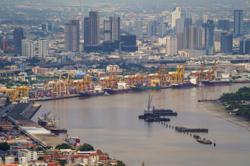 BANGKOK, July 25 (Reuters): Thailand's central bank has announced that a coronavirus outbreak may reduce gross domestic product by 0.8-2.0% this year, as authorities struggle with the country's biggest spread of the virus to date.

However, the economy still had support from government measures, and exports could still perform better than expected, Senior director Chayawadee Chai-Anant told a briefing.

The current Covid-19 wave has seen daily record infections, which the Bank of Thailand (BOT) said had became more severe and prolonged than previously expected.

Stricter containment measures have caused economic activity to plummet to levels close to those reached during a 2020 lockdown and is likely to fall further, senior director Chayawadee Chai-Anant told a briefing.

GDP could drop by as much as 2.0% if the current curbs do not reduce infections and the outbreak drags on throughout the year," she said, adding a base case was for a 1.2% GDP fall.

"That's only an impact on GDP. But there could be more fiscal measures, together with other factors such as exports to support the economy," Chayawadee said.

The economy faces higher risks than projected in June and the impact on activity is likely to be prolonged, she said, without giving specific GDP forecasts. "The situation is still fluid".

The BOT has fully implemented accommodative monetary policy and fiscal policy will be necessary to support the economy going forward, Chayawadee said. The BOT has left its key rate at a record low of 0.50% since the middle of last year.

If the government raises the public debt to GDP ceiling, it should not be a worry if it maintains fiscal discipline, she added.

Thailand's export growth in June hit its highest level in 11 years as global demand increased - a trend which is expected to continue, the country's commerce minister said on Friday (July 23).

Exports, a key driver of Thailand's growth, rose by a stronger-than-expected 43.82% in June from a year earlier, beating a forecast of a rise of 39% in a Reuters poll, and against May's 41.6% increase.

Shipments have been the only bright spot in the South-East Asian country as it struggles with its worst coronavirus outbreak to date and the collapse of vital tourism. - Reuters
Article type: metered
User Type: anonymous web
User Status:
Campaign ID: 46
Cxense type: free
User access status: 3
Join our Telegram channel to get our Evening Alerts and breaking news highlights