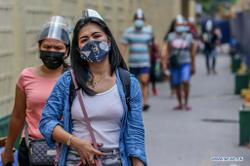 The DOH said the death toll climbed to 27,224 after 93 more patients died from the viral disease.

The Philippines, with a population of 110 million, has tested more than 15 million people since the outbreak in January 2020.

The mayors of Metro Manila, home to over 13 million people, have reimposed longer curfew hours from 10:00 p.m. to 4:00 a.m. local time amid the threat of the highly contagious Delta variant. The country has detected 64 Delta variant cases so far. "We need to limit the movement of the public through the imposition of longer curfew hours," Metro Manila Development Authority Chairman Benhur Abalos said.

The Philippines has recorded the fourth death from the highly infectious Covid-19 Delta variant, the Department of Health (DOH) said Sunday.

The DOH said that the country now has 119 Delta variant cases after detecting an additional 55 cases.

"One case has died while 54 cases have been tagged as recovered," the DOH said in a statement, adding that six of the new cases are Metro Manila residents.

"We call on both public and private sectors to ensure active case finding, aggressive contact tracing, immediate isolation or quarantine, and compliance to minimum public health standards in their respective localities and even workplaces," the DOH said. - Xinhua