TOKYO, July 24 (Reuters): Japan's and Thailand's central banks have renewed an existing bilateral currency swap arrangement, allowing both authorities to swap their local currencies for the dollar during times of crisis, Japan's finance ministry has announced.

The agreement underscored policymakers' concerns about uncertainty over regional financial stability amid the Covid-19 crisis.

Rises in US interest rates also stoked worries about capital outflows from regional economies, currency depreciation and dollar-denominated debt in some emerging markets.

The two-way arrangement also enables Thailand to swap the Thai baht against the Japanese yen at times of crisis or as a precaution against it, with the size of the scheme remaining up to $3 billion or its yen equivalent.

"Both authorities agree that continuing such bilateral financial cooperation will help preserve financial stability in both countries, and support the close bilateral economic and trade relations between Japan and Thailand," Japan's Ministry of Finance said in a statement. 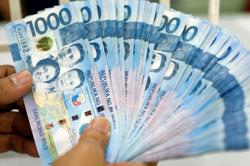