MANILA, July 24 (dpa): The Philippines has lowered the alert level at its second-most active volcano after weeks of increased unrest has left more than 21,000 residents displaced, the national disaster agency said on Saturday.

Authorities were assessing the situation "to see if the evacuees can be allowed to go home" in 145 villages around Taal Volcano in Batangas province, 66 kilometres south of Manila, said Mark Timbal, a spokesman for the national disaster agency.

Timbal said the Philippine Institute of Volcanology and Seismology (Phivolcs) on Friday night lowered the alert at Taal to level 2 from level 3, which means magma extruding from the main crater could drive explosive eruption, Timbal said.

A total of 21,789 residents have been forced to stay in evacuation centres or with relatives and friends since July 1, when Taal was placed under alert level 3 after it it spewed a dark, one-kilometre-high plume of volcanic gas and steam.

Nineteen other phreatomagmatic bursts were recorded until July 9, after which "there has been a cessation of eruptive activity at Taal Volcano," Phivolcs said in its bulletin.

Phivolcs, however, stressed that while there was decreased unrest, alert level 2 "should not be interpreted that unrest has ceased or that the threat of an eruption has disappeared." 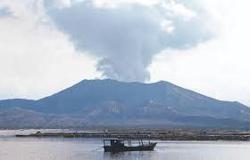