The suspects, four Vietnamese nationals and one Cambodian, were caught at a townhouse in Phnom Penh's Chbar Ampov district on Tuesday (July 20) the police said, adding that they had used the house as a place for manufacturing and storing the drugs.

"Some 102 kg of ecstasy, 39.8kg of cathinone, 14.4kg of crystal methamphetamine and 0.11kg of ketamine were seized from the suspects," the National Police said on its website.

A number of equipment and supplies used for drug processing and packaging had also been seized, the police added.

The South-East Asian nation has no death sentence for drug traffickers. Under its law, someone found guilty of trafficking more than 80 grams of drugs could be jailed for life.

The Anti-Drug Department said that during the January-June period of 2021, the authorities had nabbed 7,259 drug suspects in 3,258 cases across the country, confiscating more than 850 kilograms of illicit drugs. - Xinhua 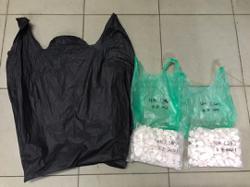