BANGKOK (The Nation/ANN): Six more islands are set to open for foreign tourists on Aug 1 under the Phuket Sandbox scheme for quarantine-free travel.

The proposal to open the islands under a “7+7” format was granted in principle by a Centre for Covid-19 Situation Administration (CCSA) meeting chaired by Prime Minister Prayut Chan-O-Cha. The CCSA said it will review the proposal before making an official announcement.

According to the proposal, foreign tourists who stay on Phuket for seven days and test negative for Covid-19 will be free to go island hopping for seven days.

Other areas proposed for the Phuket Sandbox were rejected as only about 30 per cent of their locals have been vaccinated.

The meeting also urged the Food and Drug Administration (FDA) to speed up registration of Sputnik V vaccine to allow tourists from Russia and Europe who have had Sputnik V jabs to travel to Thailand. - The Nation/Asia News Network 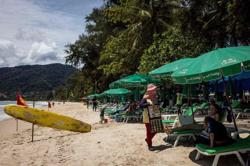