The first batch of 736,000 doses of the donated Sinopharm vaccines being flown into Myanmar arrived at Yangon's airport on July 22,2021. - Reuters

YANGON (Reuters): China is delivering two million Covid-19 vaccine shots to Myanmar this week to help fight a growing outbreak in the border area, officials said, as a spike in infections in the South-East Asian country spills over into parts of southern China.

Myanmar has seen a surge in coronavirus infections since June and on Thursday (July 22) reported 6,701 new cases and 319 deaths, both record highs.

Medics and funeral services say the real toll is far higher, and the outbreak has also been linked to scores of new cases in China's Yunnan province that borders Myanmar.

"Currently, the numbers of newly infected patients are increasing at the Chinese-Myanmar border," China's ambassador in Myanmar Chen Hai said on the embassy's Facebook page, noting pressure on authorities to contain infections in Yunnan.

The ambassador said he believed the countries would be able to cooperate effectively on prevention and control of the virus on the border.

The current outbreak in Yunnan started on July 4, and has been concentrated in Ruili and Longchuan, two cities on China's border with Myanmar.

The outbreak marks the second cluster of infections in China involving the highly contagious Delta strain, following an outbreak in southern Guangdong province through May and June.

Yunnan vice-governor Zong Guoying promised this week to establish a "fortress of iron" to stop further transmissions as he visited Ruili.

The United Nations said in a report on Monday it was stepping up efforts to combat an "alarming spike" in COVID-19 cases in Myanmar and expected the country to receive enough vaccines via the Covax facility this year for 20% of the population.

The first batch of 736,000 doses of the donated Sinopharm vaccines being flown into Myanmar arrived at Yangon's airport on Thursday.

Myanmar's Union Minister Thet Khaing Win said the priority would be to vaccinate those living near the border with China to ensure smooth trade flows in the area, the state Global New Light of Myanmar reported.

The minister said that China was donating two million vaccine doses in three instalments this week, with a further four million purchased doses due to arrive between July and August, the paper reported. 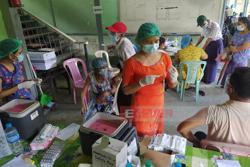