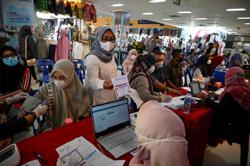 Healthcare workers take swab samples from Covid-19 patients at the emergency room of the Cengkareng Regional General Hospital in Jakarta on June 23, 2021. - Antara

JAKARTA (The Jakarta Post/ANN): The government has pledged to roll out mass testing, tracing, treatment and vaccinations across several densely-populated agglomeration areas around the country in a bid to improve its national data on Covid-19 which officials say would become the basis for relaxing community mobility restrictions in various regions.

Indonesia’s Covid-19 data landscape has been fraught with issues of reliability, which officials have pinned on several regional administrations that have not been forthcoming about their data on case numbers, bed occupancy rates and testing samples, among other figures.

Epidemiologists also believe the nation has severely underreported its Covid-19 data, and that any official figures make up a small part of the actual numbers.

But now the government has provided some indication that it is attempting to improve its data collection, with President Joko “Jokowi” Widodo announcing a plan to relax emergency public activity restrictions (PPKM Darurat) as early as next week, which he said would be predicated on the steady decline of certain indicators.

Coordinating Maritime Affairs and Investment Minister Luhut Binsar Pandjaitan followed up the announcement the following day by replacing the alphabet soup of previous curbs with a four-tier system of community mobility restrictions (PPKM I–IV) based on standards set out by the World Health Organization (WHO).

According to the President’s instruction, Luhut said, a number of regions would be eligible to ease restrictions from Monday if they managed to show improvements in Covid-19 case numbers as well as the transmission rate, responsiveness of the healthcare system and the “psychological state of the people”.

“We’ll be looking at all the data so that by July 26, several areas would be able to relax [curbs] and gradually reopen — but only if they demonstrate improvements on all sides, especially a decline in cases and WHO parameters,” the senior minister said during a press briefing on Wednesday.

More testing As part of this new drive, Luhut said the government planned to conduct testing and tracing "en masse" at self-isolation centers located in densely populated areas, particularly in sizeable agglomeration areas such as Greater Jakarta, Greater Bandung and Greater Surabaya, as well as other urban sprawls in and around Surakarta, Malang and Semarang, among other places.

The idea is that any patient whose test comes back positive would be immediately placed under quarantine at government-run facilities, where they would receive due treatment and be able to recover within eight days.

“Our objective is to break the Delta variant’s chain of transmission. We will begin in one or two days and we will do this en masse. The upcoming relaxation of curbs on July 26 will see us improve testing, tracing, treatment and vaccinations all in parallel,” Luhut said.

Based on data gleaned from regional leaders earlier on Wednesday, the coordinating minister said several regions had already demonstrated encouraging signs of improvement.

He was quick to add, however, that the remaining days under the emergency curbs this week would be used to ensure that this improvement did not take a turn for the worse.

“We hope that everyone can be patient, because we are fighting against a very malignant Delta variant,” he said.

Citing a “downward trend” in new daily cases and national bed occupancy rates (BOR) on Tuesday, the President moved to extend emergency mobility curbs until the end of this week with a view to relaxing them next week, even as various indicators show that Covid-19 is still spreading uncontrollably across the archipelago.

New daily cases have seen a not-so-steady decline over the past week, from a peak of nearly 57,000 on Thursday to 33,773 cases on Wednesday, although epidemiologists warn that these figures are impacted by the number of tests conducted over the weekend leading up to the Idul Adha public holiday on Tuesday.

Testing remained low during the weekend, with fewer than 140,000 people getting screened using polymerase chain reaction (PCR) or antigen tests, compared to around 180,000 over the course of the previous week.

The figure is also far below the government objective of conducting between 400,000 and 500,000 tests per day, which was set out at the start of the emergency curbs this month. The number of new daily fatalities remains alarming, however, at 1,383 deaths as of Wednesday.

The hospital bed occupancy rates in various regions such as Yogyakarta, Banten and Jakarta are now hovering between 80 and 90 per cent, according to data from the Health Ministry. This is an improvement over the rates at the beginning of the curbs but is still dangerously high.

And while national Covid-19 task force spokesman Wiku Adisasmito attributed the decline in BOR numbers to the implementation of PPKM Darurat, Masdalina Pane of the Indonesian Epidemiologists Association (PAEI) warned people from conflating it with a decline in patient numbers.

Instead, the decrease in occupancy rates is linked to a recent Health Ministry requirement for hospitals to only admit Covid-19 patients of severe symptomatic cases, whereas people with mild or asymptomatic cases are required to self-isolate elsewhere.

“Unfortunately, this is not accompanied by strict supervision. [...] In the past few weeks, [...] we have seen many people die in self-isolation, which is unacceptable,” she told The Jakarta Post on Tuesday.

This decrease is further linked to an instruction to convert regular hospital beds to Covid-19 beds, said Gadjah Mada University epidemiologist Riris Andono Ahmad. Both Jokowi and Health Minister Budi Gunadi Sadikin instructed regional administrations on Monday to increase the allocation of Covid-19 beds in their respective areas, using capital Jakarta’s near 50:50 ratio as a benchmark.

And while data on daily new cases and bed occupancy rates can be easily altered, the absolute number of deaths is for experts often more telling.

Masdalina said the number of deaths was a sign the government could not afford to ignore.

“Daily new cases might decline because people might not get a test or surveillance measures are relaxed, but there are many people with severe symptoms who eventually die,” she said.

She said the government was still too fixated on "artificial measures" of mobility restrictions and paid too much attention to various related metrics, while neglecting the focus on testing and tracing. - The Jakarta Post/Asia News Network 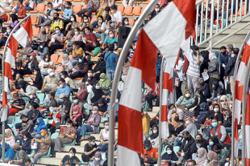