BANGKOK (The Nation/ANN): Prime Minister Prayut Chan-O-Cha (pic) met 40 CEOs and business leaders via video conferencing on Wednesday (July 21) to discuss how the economy can be rebuilt in the wake of the Covid-19 crisis.

The event was hosted by the Federation of Thai Industries (FTI)

“The prime minister said Thailand is facing difficult challenges, but both the government and private sector have the same goal – overcoming this crisis together,” government spokesman Anucha Burapachaisri said.

“Therefore, all parties have to set aside their differences and build mutual understanding to achieve that goal.”

FTI chairman Supant Mongkolsuthree said the 40 CEOs have offered the government a four-point strategy on helping the business sector survive amid the worsening outbreak:

• Disease control: The government must work with private partners to establish non-hospital vaccine units to boost the inoculation rate as well as provide rapid testing to people at risk. A digital platform should be established to provide comprehensive telemedicine services to expand healthcare coverage and reduce the risk of infections in hospitals

• Remedies for businesses and individuals affected by lockdown: This should include not just businesses that were ordered shut but also industries that have suffered labour shortage due to the lockdown.

• Short- and long-term economic stimulus plans: The government must stimulate spending among high-income earners as well as promote private investments, which will result in a boost in employment and a more stable economy.

• Post-Covid rehabilitation plan: A public-private joint committee should be formed to design campaigns that help put the country back on the track of long-term development goals such as new agriculture promotion, quality tourism campaigns and digital transformation.

“Prime Minister Prayut thanked the CEOs for their suggestions and said the four-point proposal is in line with the government’s policies in driving the country forward amid the outbreak,” Anucha said.

“The government will try to implement the strategies in the frame of law, and the premier insists we will be able to fully open the country within 120 days [as per a promise Prayut made on June 16].” - The Nation/Asia News Network 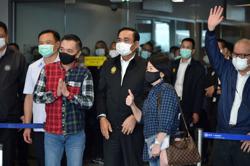