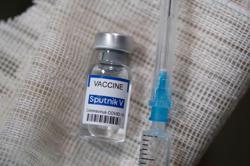 The first samples taken from this batch will be transported to the Gamaleya Center, the Russian research institute that develops the Sputnik V vaccine, for quality control.

The vaccines manufactured in Vietnam will be used in the country's National Expanded Programme for Immunisation, as it is dealing with a severe fourth wave of infections while the vaccine supply is still limited.

“RDIF and VABIOTECH are actively cooperating in the technology transfer process to provide easier access to Sputnik V for the population of Vietnam," Kirill Dmitriev, CEO of the RDIF, said in the statement.

"As the pandemic is far from over and new, more dangerous variants of coronavirus are being detected in various regions of the world, RDIF is increasing capacities for production of Sputnik V to speed up the vaccination with one of the best vaccines in the world.”

President of VABIOTECH Đỗ Tuấn Đạt said he hoped the cooperation between RDIF and the firm will "help provide quality and affordable Covid-19 vaccines to Vietnam and other South-East Asian countries.”

Earlier, Vietnamese health minister Nguyễn Thanh Long said that VABIOTECH would be bottling and packaging the Sputnik V vaccine starting this July with output of five million doses a month.

Sputnik V vaccine, which enjoys the title of the world's first Covid-19 vaccine to be approved for use, was given conditional authorisation in Vietnam on March 23, following AstraZeneca.

T&T, a private group in Vietnam, has been approved by the Government to have negotiations with RDIF for a deal of 40 million Sputnik V vaccine doses, using the budget that the group mobilised without touching the State budget.

Sputnik V is one of the Covid-19 vaccines that have a publicly available price (less than US$10 a jab), and also can be stored at standard refrigerator temperatures (2-8 degrees Celsius) without the need for ultra cold chain storage.

"The Sputnik V vaccine is based on a proven and well-studied platform of human adenoviral vectors, which cause the common cold and have been around for thousands of years," according to the joint statement.

The vaccine makes use of heterogeneous boosting, meaning that it employs two different vectors for the two shots in a course of vaccination, which the developer claims to provide longer immunity than the ones that use the same delivery mechanism.

To date, 4,336,833 Covid-19 vaccine shots have been administered in Vietnam, mostly AstraZeneca, with 317,672 people having the full two doses. — Vietnam News/Asia News Network