"Since the start of the outbreak I have had to hide to sell my products. There is little chance to sell because my regular customers cannot find me," the 56-year-old told The Straits Times at her makeshift stall, hemmed in between a pair of umbrellas.

Vietnam's commercial capital has shut down business and social activities since early July, after thousands of Covid-19 cases were recorded. It now accounts for the majority of cases in the country.

Following the closure of wet markets, including two wholesale markets which usually provide the city with food, residents can shop at only designated supermarkets chains. Rumours of shortages have led to long lines for groceries, with people queueing for hours.

When asked why she risked breaking the law by continuing to trade, Linh said: "I am not doing anything wrong. I do not steal or rob anyone. My family has been selling vegetables for 40 years. I have no other choice but to keep going." As wet markets are closed, only authorised supermarkets can operate and sell groceries. - PHOTO: JOANIK BELLALOU

In May, the authorities imposed lockdowns after Covid-19 cases were detected in the northern industrial cities of Bac Ninh and Bac Giang. Social distancing measures were also introduced in the nearby northern capital of Hanoi.

The steady progression of the virus towards the other provinces, and especially to Ho Chi Minh City, prompted the government to implement Directive 16, which came into effect on July 7.

The directive forbids all commercial activities, as well as public gatherings.

As at Sunday (July 18), Ho Chi Minh City accounted for the majority of infections in the country, with 31,000 cases out of a total 49,000 cases nationwide.

While the majority of the cases were detected in areas already under quarantine, the authorities admitted that they have been unable to trace the chain of transmission for some patients. Public places are forbidden and authorities patrol the streets and fines anyone who does not comply to the law. - PHOTO: JOANIK BELLALOU

For the last two weeks, the mood on the streets of Ho Chi Minh City has turned tense and anxious. Striped red-and-white ribbons festoon the city, marking out off-limits public spaces, as well as quarantine areas.

Draconian measures to curb the virus' spread have residents on tenterhooks, as an entire area can be abruptly locked down for several weeks if a single infection is detected.

Only the most vulnerable continue to appear on the deserted streets, desperate to make a living.

Tuan Nguyen, 24, one of the many shippers still legally allowed to work, fears for his health.

"Every day, I have to meet a lot of people, and I don't know if they have Covid-19 or not. I just want to stay home and be safe, but my company does not allow shippers to take a break," he told ST.

Meanwhile the city's nine million people have to negotiate the myriad rules, fines and roadblocks.

Around 300 police checkpoints have been set up around the city, and mobile police regularly patrol the streets. 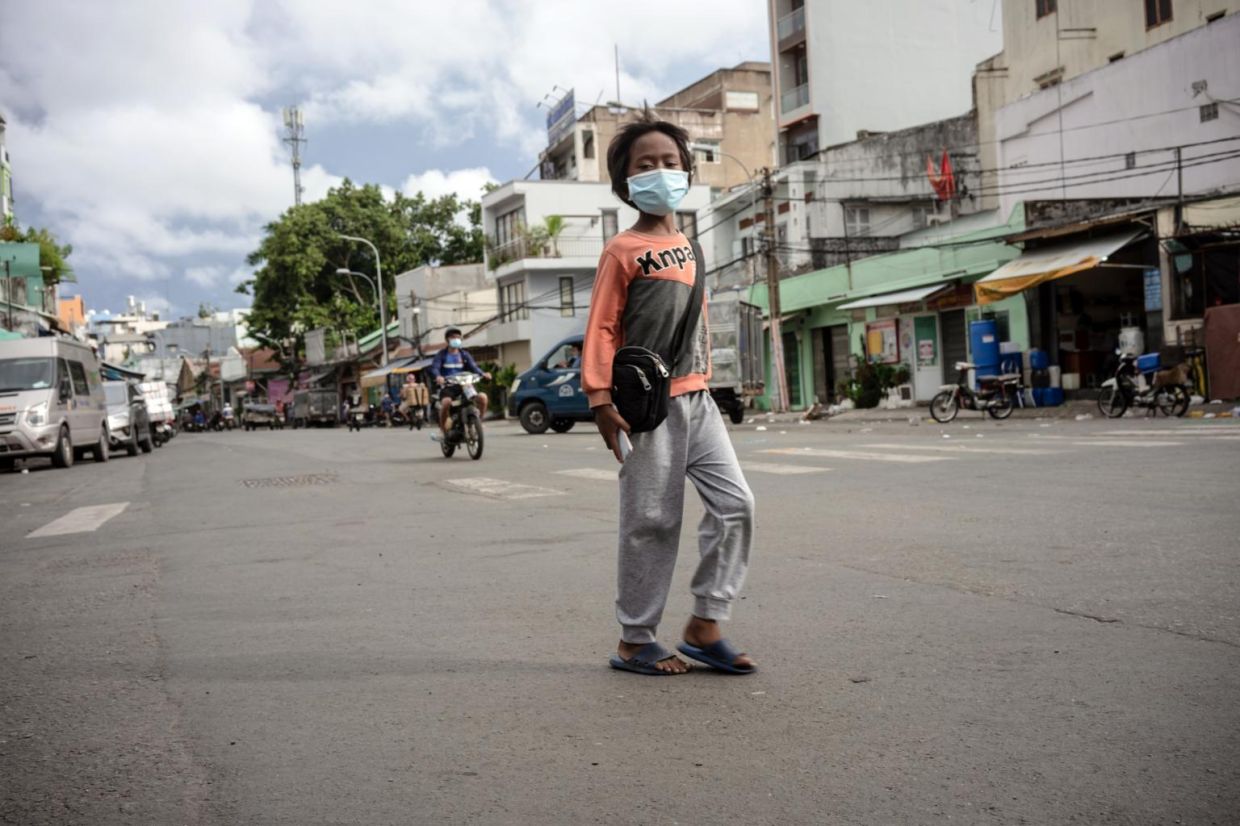 Residents are allowed to leave home only to shop for groceries and attend to health-related issues.

In Thu Duc district, some residents have been fined for walking their dogs, while repeat offenders for other breaches have been threatened with water cuts.

Halting all economic activities has left daily wage earners such as street peddlers and private trash collectors with no income, and it is as yet unclear when these activities can resume.

But the scheme has been criticised for its complicated procedures.

Mr Bui Ho, Miss Linh's son, explained that the family had so far not received any financial aid from the government since the pandemic began.

The 28-year-old, who worked in a packaging shop prior to the recent outbreak, has now been unemployed for three weeks.

"We went to the People's Committee, but it seemed our situation did not qualify for the promised help. If the pandemic does not end soon, many will starve," he said, referring to government administrators. - The Straits Times/ANN