Mercedes driver Lewis Hamilton of Britain, right, celebrates on the podium after winning the British Formula One Grand Prix, at the Silverstone circuit, in Silverstone, England, Sunday, July 18, 2021. - AP

SILVERSTONE, July 18, 2021 (AFP): Lewis Hamilton was accused of being "dangerous and disrespectful" in reviving his Formula One title defence by winning the British Grand Prix on Sunday after a first lap crash that left championship leader Max Verstappen complaining he had been "taken out".

Hamilton retorted after the race that he would "not be bullied".

Roared on by a crowd of more than 140,000, Hamilton attempted to overtake Verstappen on Copse corner on the first lap.

Verstappen refused to yield. The two touched wheels and the Red Bull went careening off the track and into the barrier. Hamilton drove on with just a broken wheel rim.

"Glad I'm ok," tweeted Verstappen from hospital. "Very disappointed with being taken out like this."

His boss Cristian Horner, the Red Bull team principal, had already laid into Hamilton who won his home race for the eighth time.

"I hope Lewis is very happy with himself," said Horner. "That's a hollow victory."

"Copse is one of the fastest corners in the world. You don't stick a wheel up the inside. That's just dirty driving."

Hamilton said after the race that he had felt "a lot of anger after the shunt" and blamed Verstappen.

"I don't feel he needs to be aggressive as he is," he said. "I would never back down from anyone. I will not be bullied into being less aggressive.

"We needed the points. He left a gap and I went for it."

Charles Leclerc grabbed the lead before racing was suspended while crews cleared away the Red Bull and Verstappen was taken to hospital for tests.

Verstappen was later discharged from hospital "following a thorough medical examination, without any major injuries," said the team.

He said Verstappen was "a little winded to say the least" but added there were "no injuries apparent at the moment".

Stewards imposed a 10 second-penalty, the second lightest punishment available to them, on Hamilton who was still able to chase down Leclerc.

"The penalty given does not help us and doesn't do justice to the dangerous move Lewis made on track," said Verstappen's tweet. "Watching the celebrations while still in hospital is disrespectful and unsportsmanlike behaviour but we move on."

Monegasque Leclerc was second, 3.81sec back to revive Ferrari's season.

The second Mercedes, driven by Finn Valtteri Bottas, who had allowed Hamilton to pass after the penalty, was third, ahead of the McLarens of Briton Lando Norris and Australian Daniel Ricciardo.

It was a bad afternoon for Red Bull with Sergio Perez finishing 16th and outside the points to drop from third to fifth in the standings.

- 'It looked desperate' - Horner focused his frustration on Hamilton.

"I don't care what Lewis said. That's a hollow victory."

"It shouldn't be like that. Max has incurred a 51g accident. Lewis is a seven-time world champion. He shouldn't be making manoeuvres like that, It's unacceptable," Horner said.

"It was dangerous, it looked desperate, he's put a competitor in hospital."

"The biggest result for us was that he was uninjured. I hope Lewis is very happy with himself."

Horner was also dissatisfied with the punishment.

"It wasn't much of a penalty," Horner said.

Hamilton took his penalty during a pit stop when running second and came back on to the track in fifth place.

"Regardless of whether I agree with the penalty I just take it on the chin," he said.

"I'm not going to let anything get in the way of the crowd's enjoyment of the weekend and the national anthem and the British flag."

"It was so physical, chasing down Charles. I was giving absolutely everything, didn't know if my tyres were going to last."

Leclerc was disappointed after having victory snatched away, but could still take pride in a strong drive and a first podium finish of the season.

"It's difficult to enjoy 100 per cent," he said. "I gave 200 per cent. I gave all of me but it was just not enough in the last two laps." - AFP
Article type: metered
User Type: anonymous web
User Status:
Campaign ID: 46
Cxense type: free
User access status: 3
Join our Telegram channel to get our Evening Alerts and breaking news highlights 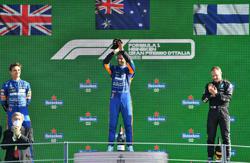