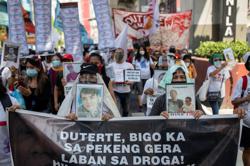 MANILA, July 18 (Bloomberg): Philippine President Rodrigo Duterte once again floated the idea of a vice-presidential run in the 2022 elections, saying it would give him immunity from lawsuits.

"They keep on threatening me with lawsuits and everything,” Duterte said at his ruling party’s assembly meeting on Saturday, referring to his political enemies.

Duterte’s political party has urged him to seek the vice presidency after his term ends next year. Under Philippine law, a president can only be elected for one six-year term.

His possible candidacy has raised legal questions about how it could circumvent a ban on presidential term limits and has also been viewed as a way for him to remain immune from criminal charges.