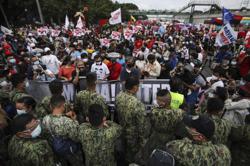 The Philippines has administered more than 12 million Covid-19 vaccine doses since March when the national vaccination campaign was rolled out. - AFP

MANILA (Philippine Daily Inquirer/ANN): If Filipinos want to end the inconvenience of wearing face shields and masks, about 50 million of them must first be fully inoculated against the coronavirus - meaning roughly half of the population should have received two doses of the vaccine against Covid-19.

Dr Ted Herbosa, adviser to the National Task Force Against Covid-19, said Filipinos still have a long way to go before they could get rid of those face coverings because only three million had been fully vaccinated as of Thursday (July 8).

"The target to advise the removal of the face mask and face shield is 50 per cent of the target population, which is about 50 million, between 40 and 50 million, " Dr Herbosa said at a briefing on Thursday (July 8).

Meanwhile, everyone has to continue complying with the prescribed health protocols, such as frequent handwashing and avoiding crowded places, Dr Herbosa said.

It was unclear whether the 50-million mark was set by the task force or the country's pandemic managers as an official target.

One good news is that more than 12 million Covid-19 vaccine doses have been administered since March when the national vaccination campaign was rolled out, according to Malacañang presidential palace.

The vaccination drive has slowed down due to delays in the vaccine shipments from abroad, he said.

Roque said the country was expected to receive this week 1.12 million AstraZeneca doses donated by the Japanese government, another 2.028 million doses of the same vaccine from the World Health Organization-led Covax sharing facility, and 170, 000 of Russia's Sputnik V doses procured by the government.

Dr Herbosa said only about 29 per cent of 9.8 million senior citizens had received their first dose.

He said there was high hesitancy among senior citizens to get vaccinated. The older folks argue that they would rather have the jabs administered to younger members of the community, he said.

But this was a wrong position to take as senior citizens were more likely to be hospitalised and die if they get infected with the coronavirus, said Dr Herbosa, a disaster medicine and emergency medical care specialist.

"The right thing is to prioritise you (the senior citizens) in administering the vaccines before the youth. So, [IT'S](it is) very important to protect your lives. This is what is called disease containment, " he said.

If the elderly are vaccinated, their infection would only result in mild symptoms and would likely not lead to death, Dr Herbosa added.

As millions of Filipinos wait for their turn to get vaccinated, the coronavirus continues to spread. 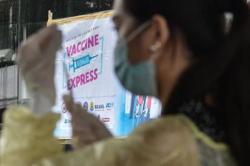 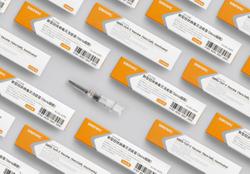