JAKARTA (The Jakarta Post/ANN): Indonesia is welcoming Super Air Jet (SAJ), a new low-cost carrier reportedly backed by Lion Air Group, to the market at a time when the aviation industry is working its way out of a slump caused by the Covid-19 pandemic.

The Transportation Ministry has issued an air operator’s certificate (AOC) for the new airline, allowing SAJ, which currently has three Airbus A320s, to operate aircraft for commercial purposes.

“With the completion of the certification process, Super Air Jet has fulfilled all technical and safety requirements, ” the ministry's air transportation director general, Novie Riyanto, said in a press statement on Saturday.

SAJ was established in March 2021. Despite the pandemic, it saw sufficient demand for air travel, especially among millennials, Super Air Jet chief executive Ari Azhari said in a press statement on May 3, as reported by Kompas.

“Super Air Jet is a new privately owned airline [...] based in Indonesia and fully funded by local investors, ” he said.

Lion Air Group transferred Rp 518 billion ($35.6 million) to SAJ and Rp 450 ($30.9 million) billion to FAN on Feb 2, according to a copy of bank statements from the group reportedly acquired by market intelligence firm Debtwire.

Debtwire also reported that, according to Law and Human Rights Ministry records it had acquired, SAJ was owned by Davin and Farian Kirana, the sons of brothers Rusdi and Kusnan Kirana, respectively, the founders of Lion Air Group.

Davin and Farian each own 50 per cent in PT Kabin Kita Top, the holding company for SAJ, according to those records, while other Lion Air Group executives also own shares in Kabin Kita Top and FAN.

Two sources also told Debtwire that the funds to SAJ and FAN had been transferred as Lion Air’s debt restructuring talks were making no progress, suggesting the family may be looking to shift focus from the distressed Lion Air to the new companies.

Lion Air Group declined to comment on its investment in the new airlines.

The airline was operating at around 15 per cent of its capacity of between 1, 400 and 1, 600 flights per day, battering its finances.

Aviation observer Gerry Soejatman said that while Lion Air Group may have tapped into a new business to have a portfolio with a clean slate, the group also sought to take advantage of the currently low entry barrier to the aviation industry, as competitors struggled to survive.

“From a competition perspective, Super Air Jet’s timing is ideal. Existing airlines are not thinking about competition right now, since they are struggling to handle internal issues caused by the pandemic, ” he told The Jakarta Post on Tuesday (June 29).

Gerry went on to say that new airlines could benefit from the market correction in the industry as many aircraft were returned to lessors, prompting leasing firms to grant discounts of up to 50 per cent for up to eight years of the lease.

“This window of opportunity is short, so new airlines want to capitalise on this chance," he said.

“SAJ’s success will now depend on its ability to absorb financial losses throughout the pandemic.”

Other countries have also seen new airlines emerge amid the pandemic. Aircraft leasing firm Avolon Holdings told media that more than 90 new carriers globally were planning to take off by the end of the year.

Gerry noted that many airlines had been established amid crises, including Lion Air. The airline was launched in 1999, two years into the Asian financial crisis that struck Indonesia in 1998. The crisis was followed by an airline industry boom in the early 2000s. - The Jakarta Post/Asia News Network 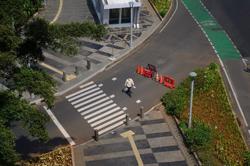