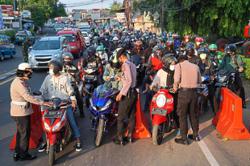 A MEDICAL committee has agreed to narrow the gap between doses of the AstraZeneca Covid-19 vaccine to eight weeks from 10 to 12 weeks previously in places where there has been outbreaks of the Delta variant, an official said.

Areas where the more contagious Delta variant, first identified in India, had been detected could “adjust the timing for the second dose,” said Kiatiphum Wongrajit, permanent secretary at the public health ministry, on Tuesday.

The move comes after Thailand last week abandoned plans for a 16-week gap between AstraZeneca doses in a bid to stretch vaccine supplies to reach more people.

Thailand reported the first instance of the Delta variant in Bangkok last month and up to now, it has spread to 20 provinces with over 660 cases recorded.

Thailand’s vaccination drive, which uses a mix of Sinovac and AstraZeneca shots, faced delays a week after it started in June due to limited supplies. About 2.2 million people are fully vaccinated from a population of over 66 million.

Bangkok, the epicentre of the latest outbreak, with around an average of 1,000 new cases per day, has only 20 beds left for coronavirus patients in critical condition at government hospitals in the city, said health official Somsak Akksilp.