In this file photo taken on July 17, 2019, Myanmar's State Counsellor Aung San Suu Kyi attends the opening ceremony of the Yangon Innovation Centre in Yangon. Detained Myanmar leader Aung San Suu Kyi on May 24, 2021 voiced defiance in her first public comments since being held in a coup, vowing her ousted political party would "exist as long as the people exist."- AFP/STR

JAKARTA (The Jakarta Post/ANN): Asean is running out of steam in its regional response to the political crisis in Myanmar, with experts and former diplomats urging caution after nearly two months of hardly any follow up since Southeast Asian leaders put together a list of principles in Jakarta to pave the way for a collective solution.

The association remains the only regional body that has put constant diplomatic pressure on Myanmar’s armed forces after they illegally seized power from the civilian government on Feb 1.

Asean leaders met in Jakarta on April 24 to press the coup maker Min Aung Hlaing for a solution. The leaders agreed to a five-point consensus demanding the junta stop all forms of violence and de-escalate tensions.

They also agreed to allow current Asean chair Brunei to appoint a go-between to mediate talks between Myanmar's military regime and the prodemocracy groups. But patience is wearing thin in the international community after weeks of scant progress on the political crisis, despite near-daily outbursts of fighting between the opposing sides.

While some experts argue that the way Myanmar's senior general Min Aung Hlaing tried to shape the implementation of the consensus in his favour only served to demonstrate Asean’s influence over the regime, there is growing impetus for Asean to seize on the opportunities it is given before it is too late.

“The window [of opportunity] is now narrowing for Asean to implement the five-point consensus, as its credibility has taken quite a hit with the recent visit to Naypyidaw and the outcome of that, ” said Moe Thuzar, a fellow at Singapore's ISEAS-Yusof Ishak Institute, at an Asia News Network webinar on Monday (June 21) evening.

Earlier this month, Brunei Second Foreign Minister Erywan Yusof and Asean Secretary-General Lim Jock Hoi visited Myanmar and met with the coup leader in Naypyidaw, in a move that was widely criticised for appearing to concede legitimacy to the power-grabbing regime.

Other observers, including former Thai ambassador Kobsak Chutikul, who served on an international advisory panel on Myanmar's Rohingya crisis in 2018, went even further to say that Asean had already missed its mark.

“The window has been closed [ever since] the Jakarta summit, after the visit to Naypyidaw by Brunei and the Asean secretary-general, after the meeting in Chongqing [in China] and certainly after the vote in the [United Nations] General Assembly on Friday, ” he said.

As a collective, Asean places much importance on the principle of noninterference. The position on Myanmar has been split from the outset, but it was most apparent in the way member states recently voted on a UNGA resolution that called for a stop to the flow of arms to Myanmar and urged the military to respect the results of a November election and release political prisoners.

Six Asean representatives, including Myanmar’s current envoy to the UN who opposed the junta, voted in favor of the resolution, while the remaining four – Brunei, Cambodia, Laos and Thailand – chose to abstain.

Former Indonesian foreign minister Marty Natalegawa said the mood had changed in the past few weeks, where member states had appeared to be “jumping ship” by not showing the necessary conviction that Asean can deliver, which in turn raises questions over the bigger Aean project.

He said member states should think of the region’s collective interest and responsibility and show support to Brunei as the current chair, noting that “a weakened chair and secretariat” would not serve anyone’s interest.

“Yes, Asean has allowed momentum to dissipate. In diplomacy, momentum [or] timing is key, ” Marty said.

“Fresh after the adoption of the five-point principles, instead of quickly developing and pushing the agenda, we allowed for a certain vacuum of action. And when for instance, the junta, within 24 hours upon the arrival in Naypyidaw [from Jakarta meeting], says that they have a different interpretation of the five-point principles [and is] waiting for more stable conditions, there was no pushback from Asean member states, ” he pointed out.

The former minister said Asean should now consider publicly engaging with the National Unity Government – the parallel government run by civilians in hiding – as a “wakeup call” for the junta to show that Aseanwas still in control of the proceedings.

Alternatively, he suggested, Asean could also establish a working group consisting of embassies of Asean member states based in Naypyidaw or Yangon to collect the data on the violence in Myanmar.

Concerns also grew as Asean continues to display a “business as usual” attitude despite the unfinished Myanmar problem, including by accepting representatives of the State Administrative Council (SAC), the military-appointed government, to represent Myanmar in various Asean meetings, including in the Asean Defence Ministers’ Meeting Plus held last week.

“I think that is unacceptable in the current state. Asean should make it clear whenever we meet with the Myanmar SAC representative that there’s one single issue, [...] which is the Myanmar power grab, ” Marty said.

“You cannot allow the SAC to feel as if it is being welcomed. It is not welcome and shouldn't be made to feel welcome.”

He also recommended using provisions under the Asean Charter that allow for the current situation to be broached at the next Asean Summit as noncompliance with or a serious breach of the charter.

“If there is noncompliance with [the Asean summit] outcome, what is to stop an innovative and courageous Asean member state from invoking Article 20 Point 4 of the Charter and say that, ‘in our view, there has been noncompliance?’” Marty said.

The said provision stipulates: “In the case of a serious breach of the Charter or noncompliance, the matter shall be referred to the Asean Summit for decision.” - The Jakarta Post/Asia News Network 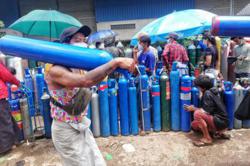