BANGKOK, June 21 (Reuters/Bloomberg): Thailand's health minister said on Monday Japan's government would donate some AstraZeneca Covid-19 vaccines, as the South-East Asian country seeks to shore-up supplies after some early delays in its vaccinations.

An agreement would be signed on Thursday (June 24) with the vaccines to be delivered around July, Anutin Charnvirakul said in a statement, which did not specify the quantity.

Thailand's mass vaccination drive, which started this month, relies heavily on AstraZeneca shots produced locally by a company owned by its king, which experienced some delays, also impacting Taiwan, Malaysia and the Philippines.

Thailand has for nearly three months been fighting its most severe coronavirus outbreak so far, which has accounted for 95% of its Covid-19 deaths.

It has planned a phased reopening to foreign tourists over the coming months, starting with the resort island of Phuket in July, but much depends on its progress in vaccinations.

Thailand has also used the Sinovac vaccine, some of which was donated by China, and has fully vaccinated 2.1 million of its more than 66 million people.

Air-conditioned restaurants in Bangkok can operate at 50% capacity and remain open until 11pm, authorities said, and convenience stores can remain open 24 hours.

Swimming pools and some sports venues are also allowed to reopen under some restrictions, according to the Bangkok Metropolitan Administration. 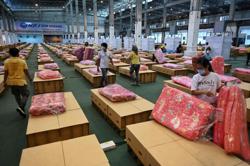