"The hot clouds which occurred at 6:34am local time were recorded by the seismogram with an amplitude of 35 mm and a duration of 113 seconds," she said.

During the observation period from midnight to 6:00 a.m., the 2, 930-metre high volcano was also recorded to emit six incandescent lava avalanches with a maximum sliding distance of 1, 000 meters to the southwest, she added.

Until now, the BPPTKG still maintains the status of Mount Merapi at level III or stand-by.

Lava avalanches and hot clouds of Merapi were expected to have an impact on the south-southwest sector, which includes the Yellow, Boyong, Bedog, Krasak, Bebeng, and Putih rivers that flow from the volcano, according to the BPPTKG head.

Given an eruption, the ejection of volcanic materials from Mount Merapi could reach an area within a radius of 3 kilometers from the top of the mountain. - Xinhua 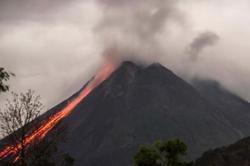