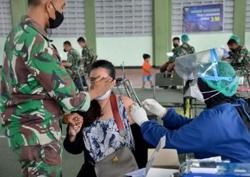 A health worker gives a shot of the Sinovac Covid-19 vaccine to a man during a mass vaccination in Jakarta, Indonesia, Monday, June 21, 2021. Indonesia's president ordered authorities to speed up the country's vaccination campaign as the World Health Organization warned of the need to increase social restrictions in the country amid a fresh surge of coronavirus infections caused by worrisome variants. - AP

JAKARTA, June 21 (Xinhua): Indonesia has registered more than 2 million cases of Covid-19 on Monday since the first case was confirmed in the country in March last year.

The country's Health Ministry said the Covid-19 cases across the country rose by 14,536 within the past 24 hours to 2,004,445, the largest single day increase in new cases.

To date, nearly 55,000 people have died and around 1.8 million others have recovered from the disease, according to the ministry's data.

Indonesia has the highest number of Covid-19 cases and deaths in Southeast Asia. The virus has spread to all the country's 34 provinces with capital Jakarta and East Java province having the most cases and the highest death toll respectively.

The government has noted that the number of Covid-19 cases in the country has been surging since recent days and it is most likely caused by the Delta variant of the coronavirus, which was first detected in India.

The widespread of the deadly variant has been detected in samples taken in Jakarta, Kudus district in Central Java province, and Bangkalan district in East Java.

A massive Covid-19 vaccination program has been held since mid-January in the country with the fourth largest population in the world.

The government aims to vaccinate 181.5 million people, about 70 percent of the population, by March next year with vaccines from various pharmaceutical manufacturers of different countries.

Indonesia has secured approximately 104.7 million doses of vaccines. The vaccines are free of charge for all Indonesians.

As of Monday, nearly 12.4 million people in the country have reportedly received two shots of a vaccine. Meanwhile, the number of those who have been injected with the first dose reached 23.5 million.

President Joko Widodo this month called on his administration to inoculate 1 million people nationwide per day starting in July. The government has targeted to administer 700,000 injections per day in June.

As for Jakarta, home to over 10 million people, the president asked the city administration to inoculate 100,000 per day to speed up vaccinations in the country.

Businesses across the country were already taking part in the national vaccination program.

Under a mutual cooperation scheme locally called "Gotong Royong" initiated by the Indonesian Chamber of Commerce and Industry, businesses, companies or institutions can give Covid-19 vaccines they purchased from the government to their employees for free.

The vaccine currently used in the scheme is Sinopharm vaccine.

Indonesia has decided to extend its micro-scale public activity restrictions, locally known as PPKM Mikro, in areas with status of red zones for COVID-19 starting on Tuesday until July 5, a move to curb the spread of the virus following the soaring number of cases.

At a virtual press conference held on Monday, Coordinating Economic Minister Airlangga Hartarto, who also helms the national economic recovery and Covid-19 response team, said the decision on the restrictions was made after his team found that the hospital bed occupancy rate in 87 municipalities in 29 provinces has surpassed 70 per cent.

It also requires teaching and learning activities in the red zones to continue online, while those outside the red zones can follow the public health guidelines for schools from the Education Ministry.

Supermarkets are permitted to open as usual under the Covid-19 health protocols, while restaurants are allowed to have customers in no more than 25 percent of their seats.

In the policy, shopping centers or malls in the red zones are required to operate only until 8 p.m. local time with a maximum number of visitors of 25 per cent of the capacity.

Indonesia , Covid-19 , Surging , Away , Vaccination , Programme , To Speed Up 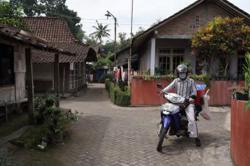 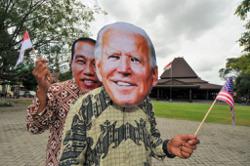