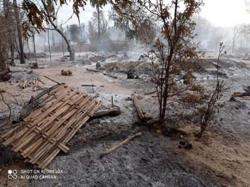 Government troops have burnt most of a village in the country’s heartland, a resident said, confirming reports by independent media and on social networks.

Government-controlled media reported the fires were set by “terrorists” the armed troops were trying to arrest. The government and its opponents each refer to the other side as “terrorists”.

After the army seized power in February, overthrowing the elected government of Aung San Suu Kyi, a civil disobedience movement arose to challenge military rule, but the junta’s attempt to repress it with deadly force fuelled rather than quelled resistance.

Photos and videos of devastated Kinma village in Magway region that circulated widely on social media showed much of the village flattened by fire and the charred bodies of farm animals.

One report said the village had about 1, 000 residents.

A villager contacted by phone on Wednesday said only 10 of 237 houses were left standing.

The villager, who asked that his name not be used because of fear of government reprisals, said most residents had already fled when soldiers firing guns entered the village shortly before noon on Tuesday.

He said he believed the troops were searching for members of a village defence force that had been established to protect against the junta’s troops and police.

Most such local forces are very lightly armed with homemade hunting rifles.

The village defence force warned residents before the troops arrived, so only four or five people were left in the village when they began searching houses in the afternoon.

When they found nothing, they began setting the homes on fire, he said.

“There are some forests just nearby our village. Most of us fled into the forests, ” he said.

A report yesterday in the state-run Global New Light of Myanmar newspaper blamed “armed terrorists” for the fire.

It said security forces had been attacked with guns and grenades on Tuesday morning when patrolling on the outskirts of the village, and when they later were able to enter, found the houses on fire.

It said an investigation found that “a group of about 40 terrorists” had set fire to one villager’s home, and the wind spread the fire until about 100 houses were destroyed.

“Security forces are working to arrest and prosecute the terrorists who ambushed security forces and set fire to the home of peaceful civilian who did not support their acts of violence, ” the story said.

Meanwhile, an ethnic political group that has been fighting the army in the east of the country has pledged to investigate allegations by the junta that its forces killed 25 construction workers after abducting a group of 47 people last month.

“The Karen National Union follows the Geneva Convention which doesn’t accept killing civilians during armed fighting, ” the group said in a statement, adding that it “will be forming a team to conduct an investigation to reveal the truth and will announce the result”. —Agencies