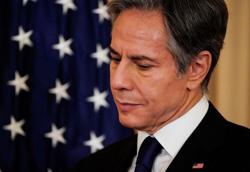 BEIJING (Bloomberg): China mocked the US’s efforts to build a broader coalition to counter Beijing, calling Washington "very ill indeed” as the world’s biggest economies continue to spar over everything from human rights to technology exports.

Chinese Foreign Ministry Zhao Lijian hit back at US efforts to rally allied support during summits of the Group of Seven and North Atlantic Treaty Organization in recent days.

The comments represented Beijing’s most pointed response since President Joseph Biden began his first visit to Europe focused on efforts to answer China’s challenge to the global order.

"The US is ill and very ill indeed,” Zhao said.

"The G-7 had better take its pulse and come up with a prescription.”

Earlier, China’s mission to the European Union warned NATO that the country wouldn’t "sit back” in the face of any challenges. Beijing doesn’t pose a "systemic challenge” to any countries, according to a statement posted Tuesday (June 15) on the website of its mission to the European Union, which added NATO should not exaggerate China’s military power.

The statement also urged NATO to push forward with dialogue and cooperation, and said the bloc should work to safeguard international and regional stability.

The comments from Beijing come after NATO Secretary General Jens Stoltenberg told reporters that the alliance is "concerned by China’s coercive policies, which stand in contrast to the fundamental values enshrined in the Washington Treaty” on which the bloc rests. He cited the country’s rapidly expanding nuclear arsenal, military cooperation with Russia and its use of disinformation.

The communique released after the NATO meeting mentioned China 10 times, compared to just once after the last summit in 2019. Russia was named more than 60 times this year. The document also said that the bloc "maintains a constructive dialogue with China where possible.”

Washington has been seeking to build a united front on Beijing, though Biden settled for a modest condemnation at the G-7 meeting over the weekend.

Biden had pushed for the group to confront China on topics such as forced labour and human rights abuses, and on its Belt and Road Initiative infrastructure plan. He said he also raised the issue of China refusing outside access to its laboratories to determine the origin of the Covid-19 outbreak.

The G-7 communique calls for a "timely, transparent, expert-led, and science-based” study led by the World Health Organization into the disease’s origins.

Several leaders, including German Chancellor Angela Merkel, pushed back over concern about turning the G-7 into an anti-China group. Suggesting any infrastructure programme the nations supported should be framed as a more positive, pro-environment effort.

Merkel said at one point in the summit that "this is not about being against something, but for something, ” a rejection of any call to specifically line up against China.

"It is the claim of the G-7 to have a positive agenda for many countries in the world, which still need to catch up, ” Merkel said.

China was dismissive of the G-7 summit, with its embassy in London issuing a statement saying: "The days when global decisions were dictated by a small group of countries are long gone.”