A woman wearing a protective mask walks in front of an electronic stock board showing Japan's Nikkei 225 index at a securities firm Monday, June 14, 2021, in Tokyo. Asian stock markets were mixed Monday as investors looked ahead to this week’s Federal Reserve meeting for hints of possible changes in ultra-low interest rates and other economic stimulus. - AP

Hong Kong, June 14, 2021 (AFP): Asian markets mostly rose Monday during holiday-hit trade, with investors looking forward to the Federal Reserve's next meeting this week hoping for fresh clues about monetary policy in light of the US economy's blistering recovery.

Another record close for the S&P 500 on Wall Street on Friday provided a healthy lead for the region, though with holidays in Hong Kong, China and Australia, business was light.

Confidence among investors remains high as vaccine rollouts, the easing of containment measures, central bank largesse and government stimulus provide support, with observers forecasting a rally that began in April 2020 will continue into next year.

US data showing inflation far higher than expected last month was taken in stride as markets appear to have accepted Fed insistence that the spike will be temporary and their ultra-loose monetary policies -- including record low interest rates -- will be maintained for the foreseeable future.

There had been a worry that soaring prices would force the bank to taper its bond-buying scheme earlier than first thought.

Still, this week's meeting will be closely followed for an idea about its plans.

Mansoor Mohi-uddin, chief economist at the Bank of Singapore, said it is not expected to announce any change at the end of the gathering Wednesday, but it is "likely to start discussing when it will begin slowing its quantitative easing, given the US economy's strong rebound from the pandemic".

"But its taper talk will last many months with the Fed stressing that it needs to see 'substantial further progress' towards meeting its goals of maximum employment and stable inflation before it will slow its asset purchases.

"We expect the Fed will wait until as late as December before announcing it will start tapering in early 2022."

Tokyo stocks ended 0.7 percent higher, while there were also gains in Seoul, Wellington, Manila, Bangkok and Jakarta, but Singapore and Mumbai fell.

Oil prices extended Friday's gains on demand optimism as the global recovery progresses, with WTI at a near three-year high and Brent around levels not seen since mid-2019.

Bitcoin surged to within touching distance of $40, 000 for the first time in more than two weeks after Elon Musk said at the weekend that Tesla would accept payments in the unit again when it is mined using cleaner energy. It was at US$39, 500 in afternoon Asia trade.

The electric car maker said in February that customers could use cryptocurrency, sending bitcoin surging, before Musk changed his mind citing environmental concerns.

Bitcoins are produced by powerful computers that have to solve equations and consume huge amounts of electricity in the process. - AFP 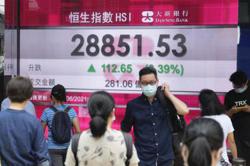