YANGON, June 13 (Xinhua): Myanmar reported two new Covid-19 deaths, bringing the death toll to 3,241 on Saturday night (June 12), according to a release from the Health and Sports Ministry.

Another 65 patients were discharged from hospitals on Saturday and the number of recoveries reached 132,830 so far.

Covid-19 was first detected in Myanmar on March 23 last year.

Meanwhile, about 88 per cent of basic education schools have reopened in Myanmar's regions and states since June 1, spokesperson of the State Administration Council told a press conference on Saturday.

As many as 42,080 out of over 47,000 schools in the country reopened and over 3.2 million students attended the schools as of June 10, Major General Zaw Min Tun said.

Schools and educational institutions had to shut down again across the country due to the increased number of Covid-19 infections after reopening for a while in late August 2020. - Xinhua
Article type: metered
User Type: anonymous web
User Status:
Campaign ID: 46
Cxense type: free
User access status: 3
Join our Telegram channel to get our Evening Alerts and breaking news highlights 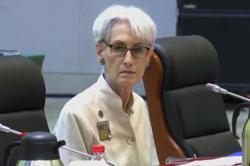