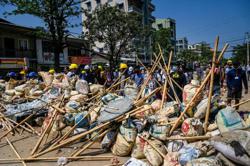 Firefighters try to put out a fire at a school in Indawgyi.- Eleven Media Group/ANN

YANGON, June 13 (Eleven Media Group/ANN): According to State Administration Council spokesperson Brig-Gen Zaw Min Tun at a press conference on June 12, there have been a total of 109 bomb blasts, 65 arson and 168 other arson acts were committed since schools reopened.

"The NLD and its supporting terrorists carried out a total of 109 mine and bomb attacks, 65 arson attacks and 168 other general hinderances," said Zaw Min Tun.

Brig-Gen Zaw Min Tun claims that "The decision to go to school is for parents and students to decide. The acts of violence are hindering their rights. Terrorists are asking young children to put on their uniform to attack the school."

In Rakhine State, the Brig-Gen says that there were 96 per cent with 82 per cent attendance rate. - Eleven Media Group/ANN