This handout photo taken and released by Dawei Watch on June 11, 2021 shows protesters taking part in a demonstration against the military coup in Dawei. - AFP

YANGON, June 12 (Reuters): Myanmar's junta on Saturday accused some of the country's two dozen ethnic armed groups of providing training to its opponents to carry out a wave of bombings that it said had targeted public buildings including schools.

Bomb attacks have become a daily occurrence as the army struggles to impose authority after seizing power from elected leader Aung San Suu Kyi in February.

Reuters was not immediately able to reach any of them for comment.

Zaw Min Tun said the authorities' information that Ethnic Armed Organisations (EAOs) were giving training came from people who had been arrested and equipment captured.

"The explosive lessons they provided are being used in destroying public buildings," he said.

Some of the ethnic armed groups, which have been fighting for decades for greater autonomy, had been in a shaky ceasefire.

But that has frayed since the coup with some of the groups openly backing anti-junta protesters. Meanwhile, new armed groups have sprung up in parts of the country to oppose military rule. - Reuters 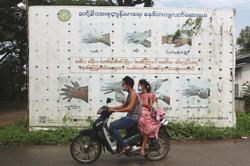