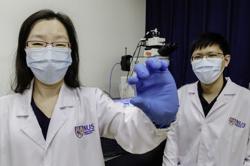 Researchers have developed a blood test which will not only allow doctors to determine the effectiveness of cancer treatment within 24 hours, but also detect the disease in annual check-ups.

Targeted treatment for cancer, such as immunotherapy, blocks the abnormal growth of cancerous cells by attacking specific molecules which instruct them to grow and spread.

But to evaluate its effectiveness, clinicians often have to rely on imaging techniques such as MRI and CT scans, which are costly

and can only be determined weeks after the treatment, said Asst Prof Shao Huilin from the National University of Singapore’s Department of Biomedical Engineering and the Institute for Health Innovation and Technology (iHealthtech).

Alternatively, a tissue biopsy, which is an invasive procedure, is carried out, she said.

Prof Shao and her team have now developed ExoScope, which is able to accurately detect cancer drug effectiveness within a day through the use of a platform to identify extracellular vesicles which circulate in the blood.

Extracellular vesicles are secreted by cancer cells and carry a variety of “cargo” inherited from their parent cells, including proteins, DNA, RNA and even drugs.

When the cancer treatment is successful, it means that the targeted cancer drug has attached to the cancer cell and interfered with its tumour growth, and so the treated cell will release extracellular vesicles, containing the drug, into the bloodstream.

This will be detected by ExoScope sensors which are able to indicate drug effectiveness, said Zhang Yan, who is one of the authors of the study and a doctoral student from the NUS Department of Biomedical Engineering and iHealthtech.

Prof Shao said the platform can also be used to diagnose cancer early by detecting extracellular vesicles in the bloodstream.

This could possibly be integrated into a routine blood test for yearly health check-ups, she said. — The Straits Times/ANN