Thailand sticking with plan to welcome vaccinated tourists in July

BANGKOK, June 6 (Reuters): Thailand will go ahead with a plan next month to reopen to vaccinated foreign visitors starting with its most popular resort island Phuket, as it tries to revive tourism while battling its biggest coronavirus outbreak so far.

The plan was approved by the government's economic task force on Friday and comes just days ahead of the start of a mass-vaccination drive, the success of which will determine when Thailand can fully restart an industry that attracted 40 million tourists annually before the pandemic.

Phuket is a pilot scheme for the reopening and is aiming to vaccinate 70% of its local population by July 1, far ahead of the national rate.

It has eased many restrictions in recent weeks, with few daily local infections recorded, and has so far inoculated about 50% of the population.

Under the "Phuket Sandbox" plan, foreigners who have been fully vaccinated and fly direct to Phuket from overseas do not need to undergo quarantine.

Thailand lost about $50 billion in tourism revenue last year, an 82% slump, with Phuket, which is visited by about a quarter of foreign tourists in Thailand, badly hit.

The government hopes at least 100,000 foreign tourists will come to Phuket in the third quarter.

Thailand had just 28,701 arrivals in the first four months of this year and the state planning agency predicts a total of 500,000 this year. 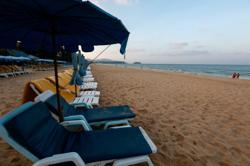