Indonesia might offer a second tax amnesty. But how successful was the first?

People pass by a banner promoting the government's tax amnesty at the Tanah Abang textile market in Central Jakarta. - Antara

JAKARTA (The Jakarta Post/ANN): With plans of a new tax amnesty resembling that of 2016, the government seeks to increase state revenue as a quick fix for a huge budget deficit caused by the coronavirus pandemic, but critics warn that a second programme may encourage tax evasion.

Coordinating Economic Minister Airlangga Hartarto said on May 19 that the plan was included in a proposed amendment to Law No. 6 of 1983 on general provisions and tax procedures, along with a plan to increase value-added tax (VAT), high-net-worth individual (HNWI) tax and many other changes.

He added that President Joko “Jokowi” Widodo had sent a letter to the House of Representatives, implying the discussion between the government and lawmakers would begin this year.

So far, there is little clarity as to how a second tax amnesty might play out and why the government wants to bring it back during the pandemic, with some suspecting lobbying pressure from businesspeople.

“If the discussion was carried out well and involved all stakeholders, we would respond positively, ” Rosan said during a webinar on Friday (May 28), though noting that many countries had offered a tax amnesty more than once and it could counter declining tax revenue.

Hipmi head of finance and banking Ajib Hamdani told The Jakarta Post on May 23 that, “the tax amnesty policy deserves to be continued”.

The first tax amnesty was carried out under Law No. 11/2016 with the declared goal of improving tax compliance and increasing government revenue. It was offered with the knowledge that many Indonesians hide assets abroad and the government is missing out on a lot of potential revenue.

The Finance Ministry estimated at the time that Indonesians were keeping almost Rp 4 quadrillion (US$280.51 billion) in so-called tax havens abroad.

In a 2016 statement, the Office of the Coordinating Economic Minister contended that the program could also bring more investment to Indonesia and boost economic growth.

The programme was launched in July 2016. The government gave individual and corporate taxpayers nine months to get tax relief on undisclosed assets from past years up to December 2015 by paying a redemption fee in exchange for immunity from prosecution.

For overseas assets, the government imposed a 4 per cent tax if those assets were declared by September 2016.

The rate went up the longer taxpayers waited to come clean about their assets, reaching 6 per cent for assets declared within the next three months and 10 per cent in the last 3 months of the programme.

The government said it might slash the rate by half if taxpayers also repatriated their wealth apart from just declaring it.

The repatriated offshore assets then had to be kept in Indonesia for at least three years in instruments prepared or appointed by the government.

Theoretically, this should create a huge inflow of funds into Indonesia’s financial system. The authorities would impose a fine of an additional 200 pervcent on top of the base tax rate if it found any undisclosed assets from tax amnesty participants.

Taxpayers who did not participate could be subject to penalties and legal prosecution.

At the end of the tax amnesty, the government was only able to achieve one of several stated targets, according to the Taxation Directorate General’s annual report of 2017, namely to register declared assets worth Rp 4.738 quadrillion, exceeding its Rp 4 quadrillion target.

The government collected just Rp 114 trillion worth of redemption funds, missing the Rp 165 trillion target, and fewer than 1 million taxpayers participated in the programme. More than 30 million taxpayers held a taxpayer identification number (NPWP) during that period.

The impact of the tax amnesty on state revenue is unclear.

According to the Finance Ministry, Indonesia’s tax-to-GDP ratio continued to decline after the programme; from 10.8 per cent in 2015 — low by international standards — to 10.36 per cent in 2016 and 9.98 percent in 2017, before picking up again to 10.24 per cent with the help of a temporary surge of commodity prices.

The tax amnesty’s impact on tax compliance is also unclear.

After increasing drastically from a rate of 60.78 per cent in 2016 to 72.64 per cent in 2017, it became stagnant and kept falling under the government target. The rate refers to the percentage of taxpayers who file annual income tax returns out of the total number of taxpayers in the database.

Center for Indonesia Taxation Analysis (CITA) research manager Fajry Akbar reminded the government that a second tax amnesty could create a sense of injustice, especially to those who participated in the first programme.

“To increase the sense of justice, the government should be more selective by defining additional obligations for anyone who still wants to participate in it, ” Fajry told the Post on May 25. The head of the Indonesian Employers Association’s (Apindo) tax committee, Siddhi Widyaprathama, expressed doubt that a second tax amnesty could have a significant effect, implying it would lose its meaning as the government tried to repeat it after such a short period of time.

“If we [offer] a tax amnesty too often, the effectiveness will decrease. It might lead to moral hazard, ” Siddhi told the Post on May 24.

He suggested that the government focus instead on controlling the pandemic because that would determine how well household spending could pick up and accelerate economic recovery, which in turn could help a tax revenue rebound. 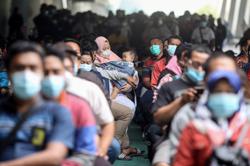