This charts a possible path for Philippine President Rodrigo Duterte after his single six-year term ends next year. - Reuters

MANILA, May 31 (Bloomberg): Philippine President Rodrigo Duterte’s political party has urged him to run for vice president in the 2022 elections, charting a possible path for him to stay in a top government post after his term ends next year.

Duterte’s political party PDP-Laban on Monday passed a resolution that also urges him to choose a presidential candidate, according to the group’s live-streamed assembly. Under Philippine law, a president can only be elected for a single six-year term.

Earlier in the day, Duterte’s spokesman Harry Roque said the president "leaves it to God” whether or not he will seek the nation’s second-highest elected post. "If the President thinks it is God’s will, he will make the proper announcement in due course, ” Roque said.

The push for Duterte’s vice-presidential run is a way for him to remain in power and immune from criminal charges after his presidency, said Earl Parreno, political analyst and author of a biography on the president. It could also be part of a plan to boost the chances of Duterte’s aide, Senator Christopher "Bong” Go, for the top job, Parreno added.

"Duterte and Go are running the country now. We will have more of the same six years if they win, ” Parreno said. He added that the president is unlikely to have his daughter, Mayor Sara Duterte, as his running mate, because they would want to also stay in power in their home city Davao.

Sara was the public’s top choice to be the next president, based on Pulse Asia Research Inc.’s survey last quarter. Duterte has repeatedly opposed the idea of his daughter succeeding him. - Bloomberg 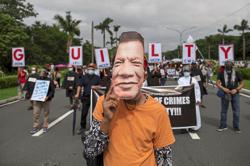 Indonesia apologises for 'excessive force' against deaf Papuan man
Singapore braces for a leap of faith in its Covid strategy
Philippines may shut down Facebook if being used by ‘trolls’
Covid-19 cases rise to over 3,000 in Tokyo as more regions weigh emergency
Indonesia-Singapore travel corridor delayed: Sandiaga
Hanoi begins mass Covid-19 vaccination, aiming to cover 5.1 million residents by April
China's Sinopharm Covid-19 vaccine could soon be available in Singapore
US, India must work against threats to democracy: Blinken
Thai front-line medics to get US-donated Pfizer jabs in next 30 days
Taiwan ex-deputy defence minister investigated over 'China spy' contacts