JAKARTA, May 31 (dpa): Beijing on Monday called US allegations that a Chinese fishing company is involved in forced labour practices a "lie" and promised to defend the interests of Chinese companies.

The China govt also confirmed that the fishing company's Indonesian crew members in question in the forved labour report that they have been treated well and were well loked after.

On Friday, the US government imposed an import ban on seafood from the fishing fleet of the Chinese Dalian Fishing Company on suspicion of forced labour.

US Customs and Border Protection (CBP) issued an order against the import of the company's seafood products "based on information that reasonably indicates the use of forced labor in the entity's fishing operations," it said in a statement.

"Companies that exploit their workers have no place doing business in the United States," Secretary of Homeland Security Alejandro Mayorkas said.

In its investigation the CBP, an agency of the Department of Homeland Security, "identified all 11 of the International Labour Organization's indicators of forced labor," including physical violence, withholding of wages and abusive working and living conditions.

Wang insisted the fishing company's Indonesian crew members were interviewed last year when the first reports of forced labour became public, and they said they had not been treated unfairly. 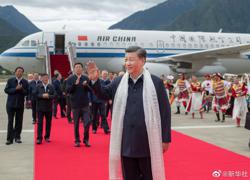