Morning commuters wearing face masks, amidst concerns about the spread of the Covid-19 coronavirus, ride past in Hanoi. Vietnam announced the discovery of a new Covid-19 variant which spreads quickly by air and is a combination of the Indian and UK strands, state media reported on May 29. - AFP

According to the Health Minister Nguyen Thanh Long, the hybrid strain could spread very fast in the air, and the Vietnamese health ministry will announce this new strain on the world gene map.

The two mutated strains first identified in Britain and India are currently the most common variants among the new COVID-19 cases in Vietnam in the ongoing infection wave.

Both the British and Indian variants of the virus are said to be more transmissible than other strains, which may explain in part why Vietnam is reporting record coronavirus cases.

Vietnam has been praised for its response to the pandemic, yet after a month without any community transmissions of the virus, local transmission cases emerged again on April 27 and, on May 15, Vietnam recorded its first Covid-19 death in eight months.

The new cases are linked to a 27-year-old man who returned to Vietnam from Japan on April 7, and a Chinese expert entering the country for work, both of whom tested positive after completing their mandatory two-week quarantine.

Vietnam has officially recorded 6,396 coronavirus cases, including 1,492 imported cases and 47 deaths since the pandemic began. Over 3,000 of those reported cases have been confirmed in since April 27. - Bernama 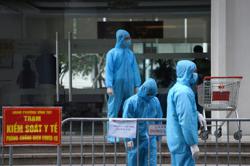