THE Kampong Trach district administration in Kampot province has decided to temporarily ban the production, import and export, and distribution of rice wine, while two winery owners were arrested on suspicion of making and selling wine containing high levels of a toxic chemical that have killed nine villagers.

“To find out the cause of death and illness of villagers over the past three or four days, we need to place a ban on wine establishments in these two communes, ” he said.

According to Khon, nine people have died and 37 others fallen ill from a gathering to drink wine at a funeral in the commune’s Thnong village on May 21.

“Officials from the Kampot provincial health department and Kampot provincial police suspected that this was alcohol poisoning and arrested two winery owners who sold wine to the funeral house for questioning and confiscated wine for testing, ” Khon said.

Chey Chim, 65, the father of the two men detained for questioning, said that there was nothing toxic in the wine that his son and son-in-law had made. The wine was produced using traditional methods.

“A few days ago, the dead man’s nephew bought 30 litres of wine from my son for funeral guests, but I know that my son’s wine was not toxic, ” he said.

Chim called on the authorities to find out the truth before deciding to charge his relatives and allow his family to open the winery if they cleared the wine.

Provincial health department director Nha Bunthorn saidt that wine confiscated from the funeral and the winery, including wine sold in the two communes, had been sent to the National Health Laboratory for testing. — The Phnom Penh Post/ANN 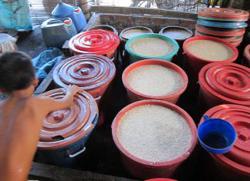