The Indian variant of Covid-19 has been detected among people in countries that border Laos but the National Taskforce for Covid-19 Prevention and Control says this strain has not yet been identified in Laos.

Leading a press briefing on behalf of the taskforce on Saturday, Deputy Director General of the Department of Communicable Diseases Control of the Ministry of Health, Dr Latsamy Vongkhamsao, said there was a strong risk that the Indian variant could spread to Laos.

She urged everyone in the country to strictly comply with government guidelines aimed at keeping the virus in check, which meant people should stay at home as much as possible.

They should leave their homes only if absolutely necessary and everyone who can should continue to work from home until the end of the lockdown. She announced 19 new infections, with the total number in Laos since March last year now standing at 1,782.

Nine new cases were reported in Vientiane and they are believed to have picked up the infection from others in their community, while the new infections found in Champassak and Savannakhet provinces are among Lao nationals returning from other countries, according to the National Centre for Laboratory and Epidemiology.

Meanwhile, 1,025 people have recovered from the virus and been discharged from hospitals.

Health officials say the main strain of Covid-19 currently circulating in Laos is the UK variant, which is thought to be more infectious than the original virus. — Vientiane Times/ANN 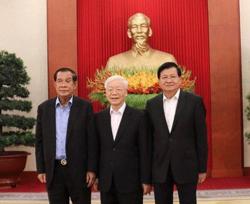