The first is a 16-year-old boy who has tested positive for the B1617 variant of the virus first identified in India, while the second is a 32-year-old IT engineer enrolled as a part-time adult learner.

This has prompted the polytechnic to move all lessons online for the next two weeks from Tuesday (May 18) to May 28, it said in a statement on Monday.

The two cases, currently not connected, were among 11 unlinked ones reported on Monday.

The others included a student at the National Institute of Education (NIE) who is also a part-time tutor, and a full-time national serviceman (NSF), said the Ministry of Health (MOH).

The NSF was last at Sungei Gedong Camp on May 14, and is currently warded at Khoo Teck Puat Hospital, said the Ministry of Defence in a statement on Monday night.

He had received both doses of a Covid-19 vaccine.

Also, a 37-year-old teacher at Frontier Primary School and an eight-year-old boy at Fuchun Primary School have tested positive for the virus, prompting their schools to shift to home-based learning two days earlier than the rest.

The teacher's infection is unlinked, while the boy's has been linked to the Changi Airport cluster. Three other patients reported on Monday were linked to this group.

They are a 37-year-old foreign domestic worker, a 63-year-old housewife and a 49-year-old Certis security officer.

There were six other linked cases for a total of 10, said the Ministry of Health.

Of these, one - a 62-year-old retired man - has been linked to the cluster related to Wok Hey in White Sands Shopping Mall. There are now four cases in this cluster.

Also, as a few Covid-19 patients had visited White Sands while they were infectious, MOH will be offering free Covid-19 testing for members of the public who had visited the mall from May 2 to May 11.

MOH will progressively inform these individuals via an SMS notification with information on how to book an appointment for their test.

All visitors to White Sands during that timeframe are also advised to monitor their health closely for 14 days from their date of visit, said MOH.

They are strongly encouraged to get tested if they feel unwell.

Of the four remaining linked patients, two are from the Learning Point cluster - a seven-year-old girl at Maha Bodhi School and a 72-year-old retired man.

The last three are a 34-year-old unemployed man linked to the newly formed Marina Bay Sands casino dealer cluster, a 36-year-old maid who has been linked to a personal chauffeur who previously tested positive, and a 57-year-old engineer who is a family member and household contact of the IT engineer at SP.

There were also seven imported cases who had been placed on stay-home notice on arrival in Singapore, said the ministry. Of these, two are returning Singaporeans or permanent residents.

The number of new cases in the community has increased from 32 cases two weeks ago to 149 in the past week.

The number of unlinked cases in the community in a week has increased from seven cases to 42 over the same period. - The Straits Times/Asia News Network 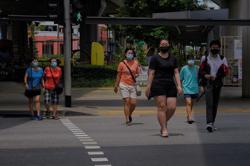