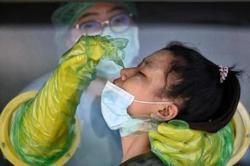 VINETIANE, May 17 (Vientiane Times/ANN): Laos recorded another 21 cases of Covid-19 on Sunday night (May 16) but, although this number is small, authorities are concerned that a large number of people who are carrying the virus or are classified as at-risk of infection are concealing their identity.

The update was reported by the National Taskforce for Covid-19 Prevention and Control at a news briefing on Sunday, which announced 11 new cases in Vientiane, seven in Champassak and three in Savannakhet, bringing the total to 1,591.

The 11 cases in Vientiane were transmitted within the local community, Director General of the Department of Communicable Disease Control, Ministry of Health, Dr Rattanaxay Phetsavanh, said at the briefing.

The new cases identified in Champassak and Savannakhet were Lao workers returning from a neighbouring country, according to the director, who is also a member of the National Taskforce for Covid-19 Prevention and Control.

The escalating outbreak is caused by two types of infection communityacquired and imported, the Deputy Director General of the Department of Healthcare and Rehabilitation, Dr Bouathep Phoumin, said.

Most of the new cases are occurring in the provinces and are mostly imported, while the number in Vientiane is declining, with most being acquired within the local community.

The situation is becoming more complex as people in groups considered to be especially vulnerable children, elderly people and pregnant women have contracted the virus.

One pregnant woman is now in serious condition. “We are preparing a team to go there to help, ” Dr Bouathep told reporters.

Nationwide, the number of infected children stands at 19.

The situation is exacerbated by the fact that some people with the virus and others in at-risk groups are not making themselves known to authorities, which enhances the potential for the spread of the virus. This is making it harder to contain the virus and slow the outbreak.

“If this is the case, and these people conceal their identity while social gatherings continue, the challenges we face will multiply, ” Dr Bouathep said.

“Right now, we don’t know exactly how many elderly people are suffering from this disease.”

There are questions around why some people prefer not to declare themselves to health officials, which would enable them to be tested and treated promptly.

Dr Bouathep said it could be because people carrying the virus were uncomfortable about the situation and were afraid of discrimination.

“I have heard unofficially that these people are not afraid of the virus itself but fear social discrimination and the fact they could be blamed for spreading the virus, ” she said.

She called on everyone to stop blaming other people for the spread of the virus but to join together to help contain the outbreak.

“No one wants it (the outbreak) to happen, ” she said. “We should no longer blame each other. We are all hurt.”

Health officials encourage anyone carrying the virus, or at risk of doing so, to come forward for prompt testing and treatment, so that lives can be saved.

If people leave it too late, their life could be at risk, officials said, citing the case of the second person in Laos to die of Covid-19 a 29-year-old man who presented himself to medical staff too late to be saved.

There are currently 1,015 people across the country undergoing treatment. Another 574 people have been discharged from hospitals and two people have died. - Vientiane Times/ANN 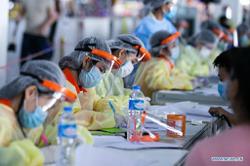