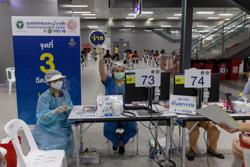 In this handout photo from the Royal Thai Army taken on May 13, 2021 and released on May 14, 2021, a Thai military personnel in protective suit detains Myanmar migrants caught in a farm area in the southern Thai province of Prachuap Khiri Khan, bordering Myanmar, as part of Thailand's increased security measures against illegal border entry into the country to prevent the spread of the Covid-19 coronavirus. - AFP

BANGKOK, May 15 (Bernama): Thai Prime Minister Prayut Chan-O-Cha reiterated that Thailand will continue providing humanitarian assistance and will not push back people fleeing violence in Myanmar.

Prayut who met United Nations (UN) Special Envoy on Myanmar Christine Schraner Burgener at Government House in Bangkok on Friday said Thailand is closely monitoring the situation along the border with Myanmar.

In a statement, Prayut said Thailand has set up several shelters to accommodate those fleeing Myanmar and provide medical treatment.

"Thailand is ready to listen and exchange useful information to bring peace to Myanmar, ” he said.

Meanwhile, Burgener tweeted she had ‘very constructive talks’ today in BKK (Bangkok) with Prime Minister Prayut and Foreign Minister Don Pramudwinai on a peaceful solution in Myanmar in the interest of the people.

Last month, Burgener met Myanmar's Commander-in-Chief Min Aung Hlaing at the sidelines of Asean Leaders’ Meeting in Jakarta, Indonesia. She also had a number of engagement including with several Asean foreign ministers who were present at the meeting.

"They discussed the important role of the UN, Asean, including Thailand as a neighbouring country of Myanmar, as well as other countries, in promoting dialogue and finding possible sustainable solutions for the current situation in the interests of the Myanmar people, ” it said.

The statement said Don also underlined Thailand’s ongoing commitment to engage and cooperate constructively with mechanisms of the UN and Asean.

It said Burgener stressed that the UN placed importance on Asean in finding possible solutions to the situation in Myanmar as well as the issue of humanitarian assistance.

Myanmar has been going through upheaval since the coup that ousted the elected government led by democracy champion Aung San Suu Kyi, with security forces killing almost 800 anti-coup protesters since then. - Bernama 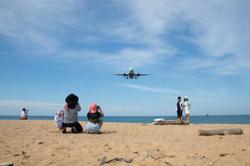