A senior citizen receives his first dose of AstraZeneca vaccine for the coronavirus disease (Covid-19), at a school that temporarily serves as a vaccination site, in Manila, Philippines, May 14, 2021. - Reuters

MANILA, May 15 (dpa): More cases of the coronavirus variant first detected in India have been found in the Philippines, which has extended a ban on travellers coming from countries with the strain, officials said on Saturday.

The Department of Health said 10 more patients were found to have the B.1.617 strain of Covid-19, bringing to 12 the total number of cases of the more contagious Indian variant in the country.

Nine of the patients were crew members of the cargo ship MV Athens Bridge, which docked in Manila last week to seek medical help for two crew who were in critical condition.

The 10th case was a seafarer who returned home from Belgium via the United Arabs Emirates in April, the department added in a statement.

In a bid to contain the entry of the Indian variant, travellers from India, Pakistan, Nepal, Bangladesh and Sri Lanka are not allowed to enter the Philippines until May 31, said Jaime Morente, the bureau’s chief commissioner.

The entry ban was also extended to the countries of Oman and the United Arab Emirates starting Saturday, he added.

The ban was first implemented on April 29 for travellers from India or those who had recently travelled to the South Asian country.

The extension of the ban was imposed after the B.1.617 variant was detected in two overseas Filipino workers who returned to the country in April.

The two patients - a 37-year-old male and a 58-year-old male - have already recovered and had no close contact with family or community members because they were quarantined on arrival, the health department said.

None of the three have a variant of concern, she added.

Despite thousands of cases reported daily, the government eased restrictions in the capital region of Metro Manila and four surrounding provinces in a bid to boost the country’s economy, which has contracted for the fifth straight quarter since last year. 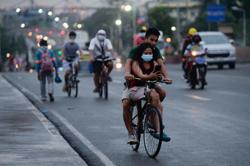