Yuki Kitazumi, a Japanese freelance journalist detained by security forces in Myanmar in mid-April and accused of spreading fake news criticizing the military coup, gestures to speak to the media as he arrives at Narita International Airport, in Narita, east of Tokyo.- AP

TOKYO, May 14 (AFP): Japanese journalist arrested while covering the aftermath of the Myanmar coup arrived in Tokyo late Friday, after charges against him were dropped as a diplomatic gesture.

Yuki Kitazumi, held in Yangon's Insein prison since his arrest last month, was one of at least 80 reporters detained during the junta's crackdown on anti-coup dissent.

"I am in good health, both mentally and physically," said Kitazumi after landing at Tokyo's Narita airport. 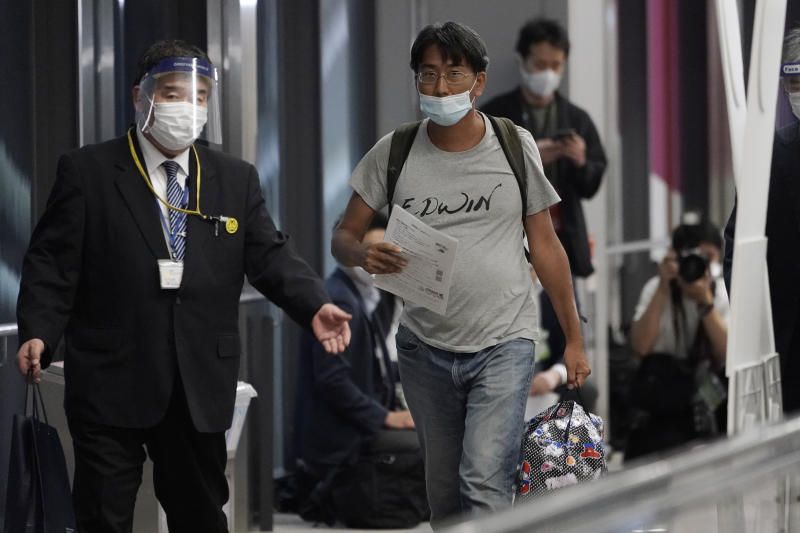 But he admitted he was "extremely frustrated" at being deported from Myanmar.

"I am a journalist and I wanted to convey what was happening in Yangon," he said, adding that he had collected harrowing testimonies from his fellow inmates in prison.

"Some are deprived of meals for two days, others are questioned whilst being threatened with a weapon, or beaten if they try to deny (the allegations).

"Thanks to my Japanese nationality, I was able to escape this type of treatment, but the reality is that many Burmese are being tortured."

Japanese Foreign Minister Toshimitsu Motegi said earlier that Tokyo had used "various channels" to press for Kitazumi's release and that it had been "tough work".

"As a result of those efforts, yesterday the Myanmar authorities announced that they would withdraw the indictment," he told reporters in Tokyo. The minister also announced that Japan has offered Myanmar $4 million in emergency food aid via the World Food Programme.

"Food supply to the impoverished population in Yangon region is rapidly deteriorating amid this situation, and they are facing difficulties in even maintaining the most basic living conditions," the Japanese Foreign Ministry said in a statement.

In late March, Japan had announced it was suspending new aid to Myanmar in response to the coup.

"We have continued our calls on Myanmar to immediately stop violence, release those who are detained (political prisoners) and return to the democratic political process," Motegi said.

Myanmar state broadcaster MRTV announced Thursday that the charges against journalist Kitazumi were being dropped "in order to reconcile with Japan and improve our relationship". He was charged under a newly revised provision in the penal code which criminalises spreading fake news, criticising the coup or encouraging disobedience among soldiers and civil servants.

Those convicted can face up to three years in jail.

Kitazumi, who had previously been arrested in February but released soon afterwards, was the first foreign journalist to be charged since the coup.

A Polish photographer arrested while covering a protest in March was freed and deported after nearly two weeks in custody.

As well as arresting reporters and photographers, the junta has also revoked broadcasting licences and ordered regular internet outages as it seeks to suppress news of the anti-coup protest movement.

On Wednesday, a reporter for independent media outlet DVB, Min Nyo, was sentenced to three years in jail for criminal mutiny.

Ko Aung Kyaw Oo, a former reporter for Tomorrow Journal, was arrested on Thursday afternoon, his son confirmed to AFP. Asean Plus Eight welcome extension of ministerial-level security hotline
Biden, Putin paper over splits as both claim summit victories
Chinese rocket carrying first crew to new space station blasts off
Japan seeks to end Tokyo virus emergency a month before Olympics
Reaction to Biden-Putin summit ranges from 'positive' to 'disturbing'
Putin lashes out at US after meeting with Biden
Authorities warn of aftershocks after 6.1 quake
Get a jab and win a prize
PM sorry for delays in vaccinations
Silent pandemic of child stunting