MANILA (The Straits Times/ANN): Singapore's contender in the Miss Universe beauty pageant used the national costume segment of the contest to call for a stop to racist attacks on Asians in the United States.

Bernadette Belle Ong wore a flaming red bikini, high boots and a long cape with the colours of Singapore's flag with the words: "Stop Asian Hate".

"What is the platform for if I can't use it to send a strong message of resistance against prejudice and violence?" Ong, 27, said in a post on her Instagram account.

In advocating a stop to hate crimes, Ong called attention to Singapore's flag.

"It symbolises unity for all and social harmony in a multi-racial, multi-cultural and inter-religious country," she said in her Instagram account.

"I wear my country proud and strong! Majulah Singapura!!!"

The Miss Universe pageant, which is viewed by some 500 million worldwide, will be held in Florida next Monday (May 17).

The national costume competition was aired for online voting on Friday.

The United States has seen a spike in racially targeted violence against Asians during the Covid-19 pandemic.

Stop AAPI Hate said in its latest report this month that hate incidents against Asians in the US nearly doubled from 3,795 to 6,603 in just a year.

In March, eight people, six of them Asian, were fatally shot at three Atlanta-area massage parlours.

A 65-year-old Filipino immigrant was walking down a street near Times Square in Manhattan when a man, in broad daylight, suddenly kicked her in the stomach.

She crumpled to the sidewalk. He kicked her once in the head. Then again. And again.

As the violent scene unfolded, three men watched from the lobby of a nearby luxury apartment building. When the woman struggled to stand up, one of the men, a security guard, closed the front door to the building.

Ong was born in the Philippines to parents who are both Singaporeans. Her family moved back to Singapore after she turned 10.

Ong was not the only candidate to use the Miss Universe platform to air political statements.

Myanmar's Thuzar Wint Lwin emerged on a runway in a pared down, traditional Burmese outfit after the gown she was supposed to wear got "lost in the mail".

But she made an impression at the end of the runway when she raised a banner in stark black letters that read "Pray for Myanmar".

Violence has spread across Myanmar since the military seized power in February from its civilian government and arrested its leader Aung San Suu Kyi.

Over 700 have died in clashes between security forces and those protesting against the power grab.

Her black gown carried the rainbow colours of the LGBTQ community with the words: "No more hate, violence, rejection, discrimination."

Miss Canada Nova Stevens, meanwhile, walked on the ramp with a superhero outfit that also advocated racial equality, and Miss Israel Tehila Levi wore a dress made of face masks in seeking "hope for a brighter future where masks are no longer necessary". - The Straits Times/Asia News Network 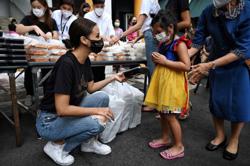