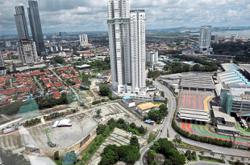 In an update on Wednesday (May 12), the operator, a joint venture between Singapore rail operator SMRT and Malaysian public transport firm Prasarana, said these system works are "progressing well".

It did not specify when these contracts were awarded.

Four of the contracts were for core systems, with Chinese firm CRRC Zhuzhou Locomotive taking charge of the rail link’s rolling stock and the Malaysia and Singapore subsidiaries of Siemens Mobility handling the signalling system and platform screen doors.

Another Malaysian firm, Sapura Rail Systems, was awarded contracts to set up the communications system and the integrated supervisory control system.

RTSO said it had earlier awarded a systems consultancy contract for the design, manufacturing, delivery, testing and commissioning of all systems for the RTS Link, which will connect Woodlands North with Bukit Chagar in Johor Baru.

RTSO chief executive Shamsul Rizal Md Yusof said: "We are pleased with the outcome of the tender exercise. There is a good mix of local and international players working together to make the RTS Link a success."

RTSO chairman Mohd Farid Mohd Adnan said the firm is fully committed to delivering the RTS project despite the challenges posed by the Covid-19 pandemic. Vice-chairman Yap Kim Wah said the good progress made on the project is a testament to the close collaboration between all parties.

In a Facebook post, Transport Minister Ong Ye Kung said the award of the contracts was another significant step forward for the RTS Link, and the four core systems being worked on are critical to the operation of the rail service.

“Building a train system is a complicated process. A little like building a big Lego model - it comes in many different pieces. But these are four very important pieces, ” he added.

RTSO was formed last year and will own, design, build, finance and manage all RTS Link operating assets, including trains, tracks and systems.

The Singapore-incorporated company will also operate and maintain the 4km rail line and the associated Wadi Hana depot in Johor Baru.

The latest update comes several months after Singapore broke ground for the Woodlands North terminus station in January, and the Land Transport Authority awarded a $180 million contract to build a 25m-tall viaduct and rail tunnels for the RTS Link.

Construction on the viaduct, which will span the Johor Strait, and the tunnels was expected to begin this quarter. Work on the Bukit Chagar terminus station had begun last November.

When completed in end-2026, the RTS Link is expected go some way towards easing congestion on the Causeway. Before Covid-19 restrictions were imposed, close to 300,000 people crossed the Causeway daily.

The rail link is expected to carry up to 10,000 passengers every hour in each direction, and the trip between both terminus stations should take only five minutes.

Commuters departing from Woodlands North will be served by a terminus station and an immigration complex about 10 times the size of a typical MRT station.

Announced in 2010, the bilateral project was suspended in 2019 at the request of Malaysia, which wanted to review its scope, structure and costs. It officially resumed in July last year. - The Straits Times/Asia News Network