Asean preps next move as dialogue moves further out of reach

Demonstrators walk, displaying the three-finger salute, during a protest against Myanmar's junta in Yangon May 11,2021 in this still image taken from video obtained by REUTERS THIS IMAGE HAS BEEN SUPPLIED BY A THIRD PARTY. NO RESALES. NO ARCHIVES.

THE signs in Myanmar are bleak more than two weeks after Asean declared a five-point consensus on what must happen in this turbulent member state.

Since the agreement on April 24 that violence must cease, Myanmar’s military has killed 32 people and arrested 437 more. A poet detained over the weekend turned up dead – with his internal organs removed.

The junta called Asean leaders’ pleas for restraint and dialogue “suggestions”, and said it will consider them, but only when “stability” has been restored”.

All this makes it likely that the military, which seized power on Feb 1, will make no concession until it cements its grip on the country.

On Saturday, the regime declared the shadow government and its subordinate organisations “terrorist” groups.

It outlaws engagement with the National Unity Government (NUG) and calls into question if constructive dialogue can be possible “among all parties concerned” – another point of consensus reached by Asean two weeks ago.

Asean is due to appoint a special envoy to help facilitate dialogue in Myanmar and this person is expected to visit Myanmar soon – or at least try to. Asean also aims to provide humanitarian aid, an aspiration that analysts dismissed even as hunger, poverty and mass displacement grip the country of 54 million.

“This is not a humanitarian problem. It’s a political crisis, ” Khine Win, director of Yangon-based Sandhi Governance Institute, said.

Politically speaking, the key parties in this crisis now could not be further apart.

Last week, the NUG formed the People’s Defence Force, a precursor to a genuine federal army. The NUG’s defence ministry also declared crimes by the military against civilians must be tried in civilian courts – a sacrilegious idea for the military, which considers itself an elite body answerable only to itself.

Two military air bases were rocked by explosions two weeks ago, followed by another attack near a navy base in Yangon last week. Local media are reporting accidents involving anti-coup protesters getting injured when the bombs they are trying to assemble go off prematurely.

In northern and eastern Myanmar, air raids by the military to retake positions seized by the Kachin Independence Army and Karen National Liberation Army have sent thousands of ethnic villagers fleeing into the forests. Nonetheless, young urbanites resisting the junta have sought out both ethnic groups for military training.

Dr Min Zaw Oo, executive director of Myanmar Institute for Peace and Security, does not expect this to perturb the military.

“The ethnic armed groups (EAO) cannot provide weapons. They are not sufficiently armed. In order to launch a large-scale offensive against the Tatmadaw (military), that will require thousands of small arms and heavy weapons, ” he said.

“Without sufficient support, especially in terms of weapons, training in ethnic-armed group areas will not have a significant effect.”

Dr Min Zaw Oo also plays down the prospect of a large-scale urban insurgency because the junta has demolished the civilian barricades that blocked troops and provided refuge for insurgents in earlier weeks. Traffic in Yangon is now coming back to life, albeit punctuated by flash mobs opposing the junta.“What we are seeing is a quite low-level, low-intensity violence, not anywhere close to Syria, Iraq and Afghanistan, ” he said. — The Straits Times/ANN 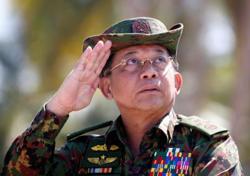