A medical staff member administers a dose of the Covid-19 coronavirus CoronaVac vaccine to a resident of the Klong Toey community, one of the areas with the highest number of positive cases of the virus in the Thai capital, outside of an indoor football stadium in Bangkok on Tuesday, May 11, 2021. - AFP

BANGKOK, May 11 (The Nation Thailand/ANN): Thailand has widened its travel ban to international arrivals from Pakistan, Bangladesh and Nepal in a bid to prevent the Indian variant of Covid-19 from entering the country.

However, the Royal Thai Embassy in Pakistan said that holders of Thai visas (except tourist visas) may travel to Thailand before May 15.

The travel ban comes after a pregnant 42-year-old Thai national tested positive for the Indian variant in state quarantine on arrival back from Pakistan on April 24.

The woman and her youngest son are the first cases of the variant recorded in Thailand, said the Centre for Covid-19 Situation Administration on Monday.

Thailand on Tuesday (May 12) reported 1,919 new cases of Covid-19 and 31 new fatalities, according to the Centre's spokesperson Taweesin Visanuyothin.

Of the new cases, 1,902 were domestic infections while the 17 others were imported cases, Taweesin said.

The infections brought the total number of confirmed cases to 86,924 in the Southeast Asian country, with more than 50,000 of them detected since the third wave of Covid-19 started in early April.

The additional 31 deaths from the pandemic reported Tuesday took the death toll to 452, according to Taweesin.

Currently 29,435 patients are hospitalised, with 1,207 being in critical condition, said the spokesperson.

Meanwhile, another 69,552 people were given their first Covid-19 shot in the last 24 hours, while 19,008 were given their second shot, bringing the total number of Covid-19 vaccine doses administered in Thailand to 1,898,454. 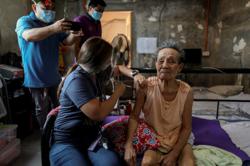