Chinese vaccines could fill the gap left by US and India, after WHO approval

BEIJING, May 11. Global Times: The grave epidemic situation in India, the world's largest vaccine producer, the WHO's approval of Chinese vaccines for emergency use, lingering questions on whether the US can really deliver its promise to provide vaccines to the world, all these have led to a widely acknowledged situation that China could be a much more reliable global vaccine supplier, especially as domestic vaccine producers vowed to ramp up production to meet domestic immunity targets and overseas demand.

After the WHO approved the Sinopharm vaccine for emergency use, Yang Xiaoming, chairman of Sinopharm China National Biotec Group (CNBG), said in a recent interview with Chinese media outlets that the Chinese vaccine manufacturer has been ramping up efforts to expand production capacity in the third-phase of production to 3 billion doses per year.

With accelerating inoculation pace in China, which has reached 10 million doses per day, the country has administered over 300 million doses domestically, and Yang believes the immune barrier of 1 billion people can be achieved by around the end of 2021 or the start of next year.

Another major vaccine producer in China, Sinovac, is aiming to reach an annual capacity of 2 billion, according to media reports.

Vaccines are believed to be the best way to overcome COVID-19, with which cross-border travel is expected to resume gradually and normal life restored. Some media outlets called it "the biggest vaccination campaign in history is underway," and according to Bloomberg's vaccine tracker, China has surpassed the US in the daily rate of doses administered and topped the list by about 6.7 million doses administered every day, though the average inoculation rate remained lower at 11.3 percent.

Chinese-made vaccines are expected to play a bigger role in supplying other countries, especially as the world's largest vaccine producer India faces a shortfall. After the Biden administration announced its support to waiving intellectual property rules on vaccines, t conflicting views emerged among industry representatives who said such a move may damage US competitive advantage. Questions are thus raised as to whether the US could really play a more active role in global vaccine supply, according to media reports. 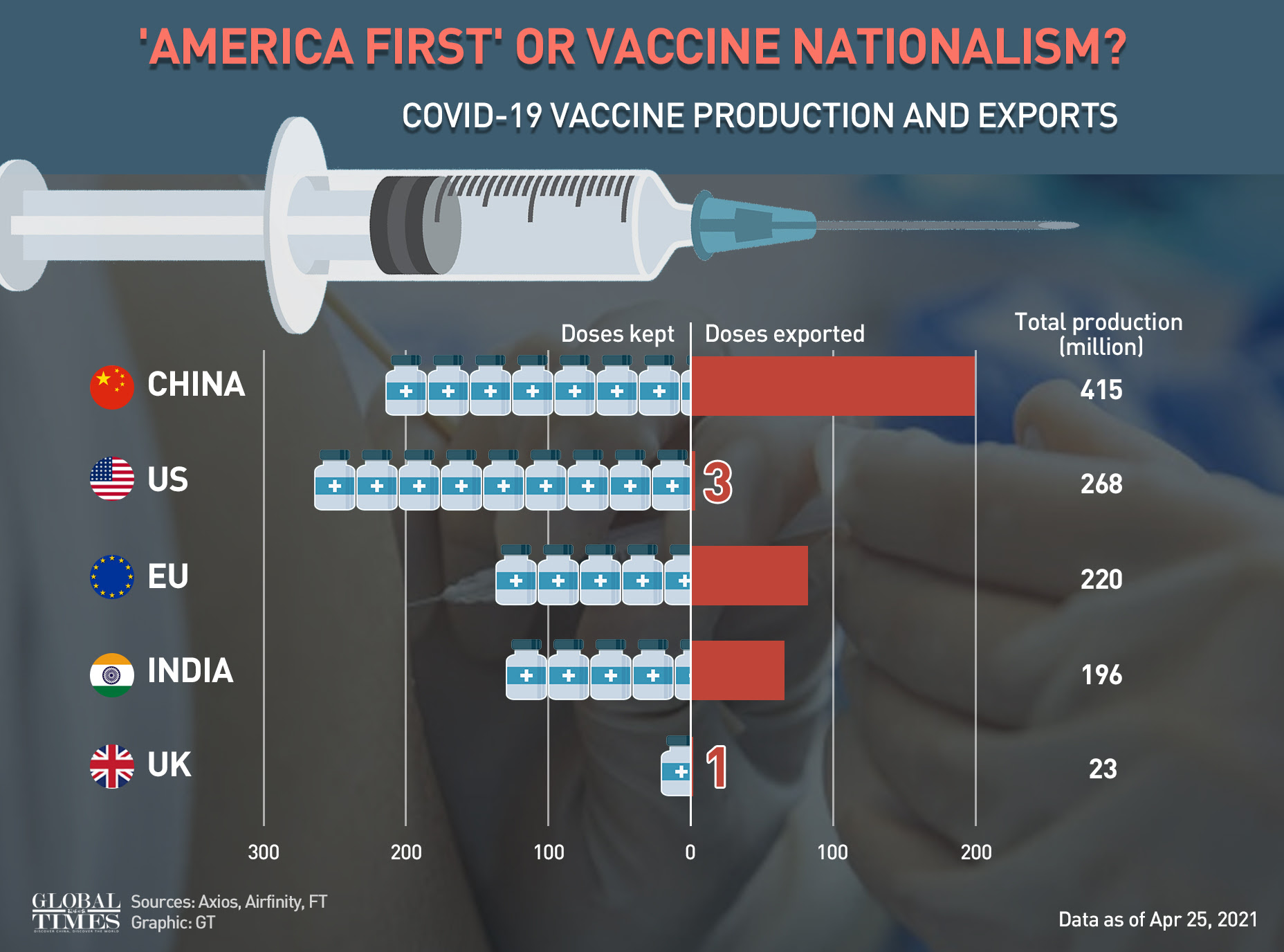 China has exported half of its produced vaccines, while the US and the UK have exported very few doses, roughly 1 to 3 percent of the total doses, respectively, according to a graphic of the Global Times. The EU and India have exported less than half of the overall vaccines made locally, the graphic showed. Role of Chinese vaccines

Earlier media reports said China had exported 240 million doses of vaccines, making it the world's top exporter, and the number is expected to grow as Chinese manufacturers transferred their production lines and technologies to more developing countries, actively working with the UN-backed COVAX initiative in making the vaccines "global public goods" with the aim of ensuring vaccine distribution equity.

China will continue working with the international community in pushing forward fair access to vaccines in developing countries, Chinese Foreign Ministry spokesperson Hua Chunying told a press conference on Monday, in response to the WHO approval of the Sinopharm vaccine for emergency use.

China has already announced to provide 10 million doses of vaccines for COVAX for emergency use in developing countries, and China puts its words into action, Hua said, adding that the country is currently keeping close communication with the WHO on the matter.

Rather than only exporting vaccines, Chinese producers like Sinovac have been working with other countries to localize vaccine production - an effective way to ensure local supply.

Egyptian Health Minister Hala Zayed said on Sunday that Egypt will start producing China's Sinovac COVID-19 vaccine in June, according to the Xinhua News Agency. The first 2 million doses will be produced in June, Zayed was quoted as saying in the report, noting that the first shipment of the raw materials needed to manufacture the vaccine will be received on May 18. Forty million will be produced in the first year, he said. It also made Egypt the first African country to produce vaccines locally, according to media reports.

India, the world's largest vaccine producer, has been severely affected by the pandemic, which also heavily weighed on its vaccine production and exports, Zhuang Shilihe, a Guangzhou-based vaccine expert, told the Global Times on Monday, when he explained how China has been taking a much more important role in global vaccine supplies.

As the outbreak reached new heights, India's vaccination campaign has slowed down, marred by supply shortages and competition among states, according to the New York Times. And even though the Indian government has promised to fast-track approvals of foreign-made vaccines, the waiver of patent protections backed by the Biden administration still needs the WTO's approval, the report said.

Vaccine producers in India have been previously struggling with a shortage of critical raw materials for COVID-19 vaccines, and the method to solve this dilemma was lifting the export ban imposed by the US, according to some Indian media reports in April.

"The core issue with vaccine supply is about the supply chain, or whether raw materials could be sufficiently provided, and a major advantage with China's inactivated vaccine production is the model of production could be copied in many other developing countries, like Egypt and Brazil," Zhuang said, noting that on the contrary, the US' mRNA vaccine production relies on a more complex supply chain.

Pfizer, for instance, needs over 200 types of raw materials from various countries, Zhuang said, noting that even in the US, the process needs to be completed in three different factories.

Chinese vaccine manufacturers have been localizing production lines in other countries and regions. For example, Sinopharm reached an agreement with Argentina to jointly produce vaccines, according to media reports in May, after Serbia planned to start manufacturing Sinopharm.

Sinovac chairman Yin Weidong also told the Boao forum in April that Sinovac would continue working with other countries, soon choosing 10 countries for tech transfer and vaccine research and development, according to media reports. Meeting the goals

While China is filling the supply gaps left by countries like the US and India in global vaccine distribution, industry representatives vowed to expand the capacity to meet the growing domestic and overseas demand of inoculation.

"The current vaccine production capacities could meet the domestic inoculation targets previously set by the National Health Commission, but we need to cover 1 billion people by the end of the year, and Chinese manufacturers have to further expand their production," Feng Duojia, president of the China Vaccine Industry Association, told the Global Times on Monday.

For now, the overall vaccine production capacity is about 3 billion doses, half of which are exported, and in addition to the WHO putting more Chinese vaccines into emergency use, exports of Chinese vaccines will further grow, Feng said, noting that as a result, domestic producers have been adjusting production plans in expanding the production.

China's annual vaccine supplies are dynamic as some other vaccine producers are ramping up their efforts to speed up their clinical trials and waiting to be approved, according to industry representatives. For instance, if CanSino Biologics' inhaled COVID-19 vaccine is approved this year, its annual production capacity is expected to increase fivefold, reaching about 1 billion doses, Feng said. 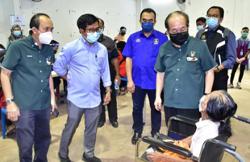