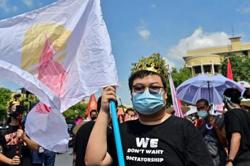 Shoppers visit a clothing market in Bekasi on May 9, 2021, ahead of Eid al-Fitr which marks the end of the holy month of Ramadan. - AFP

JAKARTA, May 11 (Xinhua)): At least 1.2 million Indonesian people in the national capital Jakarta have left the city to celebrate Eid al-Fitr/Hari Raya Aidilfirtri in their hometowns despite the government's prohibition to travel amid Covid-19 concerns, the Jakarta Police chief has said.

"The number of people leaving Jakarta is estimated around 1.2 million," the Jakarta Police's Chief Fadil Imran said at the city police headquarters on Tuesday.

Authorities have been implementing roadblocks on toll roads as well as suspensions on air, sea and railway transportations from May 6 to May 17 with only civil servants, police and military officers, and those who need to travel for works exempted in the policy.

More than 70,000 vehicles with their occupants on their way homes have reportedly been turned back amid the ban on the exodus, known locally as mudik. Some also reportedly managed to sneak past the checkpoints set up by authorities.

The Jakarta Police said it has coordinated with other relevant authorities to anticipate the backflow exodus.

Covid-19 tests at all checkpoints will be intensified, according to the city police chief.

The Ramadan fasting month in Indonesia, the largest Muslim population nation, began on April 13 and was expected to end on May 13, when Muslims celebrate the feast festival of Eid al-Fitr.

According to the ministry, 5,592 more people were discharged from hospitals, bringing the total number of recovered patients to 1,580,207.