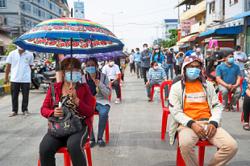 THE Permanent Mission of the Kingdom of Cambodia to the United Nations Office in Geneva denounced a statement by Prof Mary Lawlor, the UN Special Rapporteur on the situation of human rights, regarding the trial of activists from Mother Nature Cambodia (MNC).

On May 5, three MNC members – Long Kunthea, Phuon Keoraksmey and Thun Ratha – were sentenced to between 18 and 20 months in prison and fined four million riel (RM4,030) by the Phnom Penh Municipal court on charges of incitement related to environmental issues.

Two days after the trial, Lawlor issued a statement saying the activists had been imprisoned since September 2020 for attempting to protect Boeung Tamok Lake on the outskirts of Phnom Penh.

“I am saddened to learn that three human rights defenders from MNC have been sentenced to 18 to 20 months in prison. Protecting the environment peacefully is not a crime, ” she said.

“Crime is crime and it cannot be justified because it is in pursuit of other aspirations, ” it said.

The permanent mission added that Cambodia valued all duly-registered NGOs that were operating within the boundaries of law and that unfortunately, Lawlor seemed to be advocating the work of an unlawful organisation that commits crimes in the name of environmentalism.

The mission said MNC had officially dissolved itself in 2017, but the organisation continued illegally exploiting the environmental movement until now and that the self-

proclaimed human rights defenders were not entitled to break the law with impunity.

It described Lawlor’s remarks as inappropriate and an interference in the national judicial system of a sovereign state, saying that the demand for the government to arbitrarily release anyone was tantamount to an attack on the separation of powers and the independence of the judiciary guaranteed under the Constitution. — Phnom Penh Post/ANN