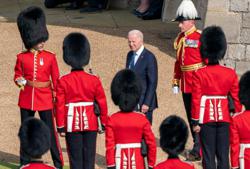 China has hit back at a statement issued by G7 foreign ministers criticising its human rights abuses and “coercive economic policies”, while expressing support for Taiwan.

Foreign ministry spokesman Wang Wenbin said on Thursday that the group of advanced economies “should focus on international anti-epidemic cooperation and promote equitable distribution of vaccines, instead of just hoarding vaccines by themselves, and only make a painless statement about helping other countries”.

“They should not criticise and interfere with other countries with a superior mentality, and undermine the current top priority of international anti-epidemic cooperation,” he said.

In a statement issued on Wednesday the G7 condemned China for its human rights violations in Xinjiang and Tibet, “especially the targeting of Uygurs, members of other ethnic and religious minority groups, and the existence of a large-scale network of ‘political re-education’ camps, and reports of forced labour systems and forced sterilisation”.

“We strongly support independent and unfettered access to Xinjiang to investigate the situation on the ground,” it said.

The statement, which stopped short of calling for concrete action against China for its alleged abuses, came after the foreign ministers of Britain, Canada, France, Germany, Italy, Japan and the United States met in London for their first face-to-face talks since the start of the Covid-19 pandemic.

The G7 would work together to foster global economic resilience in the face of China’s “coercive economic policies”, but also “look for opportunities to work with China to promote regional and global peace, security and prosperity”, the statement said.

“We encourage China, as a major power and economy with advanced technological capability, to participate constructively in the rules-based international system,” it said.

“It is in all of our interests, including China’s, to take action that addresses global challenges including climate change and biodiversity loss, to promote economic recovery from Covid-19 and to support the fight against the current pandemic and prevent future ones.”

It said the group supported Taipei’s participation in the World Health Assembly and reiterated its opposition to “any unilateral actions that could escalate tensions ” in the Taiwan Strait.

Xin Qiang, deputy director of the centre for American studies at Fudan University, said the foreign ministers’ statement was a sign of G7 unity on China.

But Beijing was unlikely to retaliate in any significant way as the group, despite its strong words, had not called for any punitive action to be taken, he said.

The G7 statement was warmly received in Taipei.

“We will continue to deepen our cooperation with G7 member states to jointly uphold global health and social well-being as well as peace, stability and prosperity in the Indo-Pacific,” Taiwan’s foreign ministry said on Thursday. 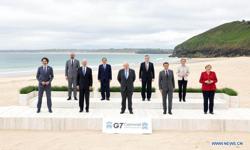