China may step up efforts to reduce steel demand as authorities and industry groups grow increasingly uneasy about high iron ore prices amid a trade dispute with its biggest supplier Australia, according to analysts.

China’s state-dominated steel sector, represented by China Iron and Steel Association (CISA), has been sounding the alarm about surging prices, urging the central government last week to help with market “malfunctions” and improve policies in the futures market.

“I don’t think the high iron ore price is a factor in the trade dispute between the two countries, but it’s probably not helping,” said Shane Oliver, chief economist at investment manager AMP Capital. “Not that there is much that can be done about it in the short-term beyond moving back away from using market forces to determine the price.”

Tensions between the two nations escalated further on Thursday with China’s National Development and Reform Commission saying it had “indefinitely suspended” its high-level economic dialogue with Australia.

It comes on the heels of more than a year of strained relations that kicked off after Canberra called for an independent inquiry into the coronavirus, which prompted a series of trade actions from Beijing.

Australia and Brazil collectively export more than 80 per cent of the world’s seaborne iron ore supply, said Erik Hedborg, senior analyst at commodities firm CRU. China imports 60 per cent of its iron ore from Australia, and consumes more iron ore than any other nation, as it is by far the world’s largest steel producer.

Although some Chinese steelmakers have gained from higher steel prices recently, the main beneficiaries of soaring iron ore prices have been companies like Anglo-Australian miners BHP and Rio Tinto, Brazil’s Vale, and their respective governments through tax revenue.

CISA in December last year demanded an explanation from BHP and Rio Tinto about the surging cost of iron ore.

“The problem with high iron ore prices is that money is leaving the steel-producing countries and ending up with the iron ore producers and the governments of countries that produce the iron ore,” Hedborg said.

“Longer-term, one problem with high iron ore prices that feed into the price of steel is potential demand destruction if the prices of steel-containing goods get too high.”

How iron ore is powering China’s infrastructure boom, and why securing new sources is so vitally important

Iron ore hit a record of US$193 a tonne on April 27, a rise of 18 per cent over the past month, while the domestic price of futures contracts on steel reinforcing bars widely used in construction hit a new high of 5,411 yuan (US$836) per tonne on the same day, Gavekal Dragonomics said in a note on Wednesday.

High iron ore prices are being driven by demand for steel in China, which has seen a post-coronavirus construction boom, and smaller than expected exports from Brazil.

Chinese steel makers are increasingly worried that once demand for steel starts to cool, profit margins on steel products will slide quickly because of excess steel manufacturing capacity. Some downstream users of steel are also grappling with rising costs.

Despite China’s unease with iron ore prices and its reliance on Australia, it is unlikely either countries would impose punitive measures involving the commodity, analysts said. Instead, Beijing is more likely to step up interventions to reduce steel demand.

The economic risks associated with high commodity prices are being discussed at the highest levels in China, including by the Financial Stability and Development Commission, which is chaired by Liu He, the top economic adviser to President Xi Jinping.

In April, the commission called for “maintaining basic stability in prices, and paying special attention to trends in commodity prices” – an unusual statement from a body that usually focuses on financial regulation, said Gavekal Dragonmics.

Shiro Armstrong, an economist and associate professor at the Crawford School of Public Policy at Australia National University, said it would be “economic suicide” if the two countries began imposing sanctions on iron ore, given its importance to both.

“China’s trade sanctions on Australia are hurting Chinese reputation as a reliable trading partner ... Australia would not want to do the same thing,” he said.

In a bid to pump up domestic supply and discourage steel exports, the Ministry of Finance removed export tax rebates for 146 steel products from May 1, and waived import tariffs on others, including pig iron, crude steel, recycled steel raw materials and ferrochrome.

In December, the Ministry of Industry and Information Technology also announced a reduction in crude steel output.

However, China’s crude steel production reached 271 million tonnes in the first quarter of 2021, an increase of 37 million tonnes, or 15.6 per cent, compared with the same period a year earlier, S&P Global Ratings said last week.

Beijing has asked Tangshan, China’s largest steel-producing city in the northern province of Hebei, to slash steelmaking capacity from March until the end of the year.

S&P predicted this would lead to a production loss of 30 million to 40 million tonnes, or 3 to 4 per cent of annual national crude steel output.

“That said, other steel mills may be motivated to increase production owing to the current high margin and good demand,” S&P said. “Failure to achieve production cuts could lead to downside risk for steel prices in the next six months.”

Analysts expect more measures from Beijing to cut steel demand, but there are also risks they could force some steelmakers out of business, resulting in job losses and hurting economic growth.

“But this is a long, slow process that will take many years,” he said. 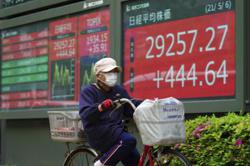